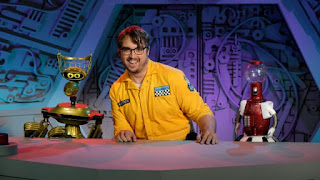 If you’ve been reading this blog for a while, you’re probably aware of the fact that I love Mystery Science Theater 3000. There’s only one thing I love more than bad movies, and it’s making fun of bad movies. In fact, a few friends and I always get together to heckle bad movies a la the Satellite of Love gang; we call ourselves the B-Movie Crew. We even have patches. It’s pretty legit.

Anyways, around Thanksgiving time I heard that Netflix was planning a reboot of the show titled Mystery Science Theater 3000: The Return, and I have to admit I was really excited and really nervous that the new episodes wouldn’t have the same feel as the ones I'm used to. So, there I was last week, anxiously sitting in front of my TV while the first new episode ‘Reptilicus’ started loading, and boy, was I happily surprised (and so so relieved.) There may be new baddies (I bow to you, Felicia Day and Patton Oswalt) and a new hapless guy (Jonah Ray) stuck with the ‘bots, but this was still my MST3K, it was still our MST3K.

Right off the bat, the jokes are just as clever and super-fast paced and had me laughing out loud. They somehow make it feel as if the show had never stopped, and that no time has passed between seasons, which is saying a lot since the show went off the air in 1999. It feels like a continuation, not a reboot. They had some nice nods to the original series, but that’s not to say they haven’t made some improvements either—for starters, the ‘bots have all new voices, Tom Servo can now fly (but only while in the theater), the doors leading up to the theater have gotten a nice shine up, and the new theme song is just as catchy and head-bobby as the old one. The only thing that slightly threw me was that I did feel at times the interaction/chemistry between Jonah, Crow and Tom was a little awkward, but I’m sure as the series progresses they’ll hit their stride and it’ll all fall nicely into place.

All in all, as far as reboots go, this is up there with the best. There’s no other way I can explain it except that it feels right, it feels natural. The vibe is the same, just with new terrible movies, and I can’t wait to see what else is in store for the new series and where the Satellite of Love takes us next.

If you’re a fan of MST3K, or even if you’re just looking for some mindless sarcastic snarky wit, definitely check out the new episodes streaming on Netflix now!

Posted by Heather at 6:04 PM No comments:

So last weekend, I got to experience my one true love, Harry Potter, in a whole different way-- in concert. Basically, Radio City Music Hall was playing the entire first movie and the New Jersey Philharmonic Orchestra was playing the score live. It. Was. Amazing. 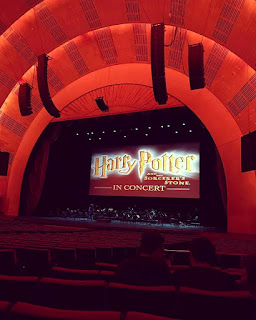 A few years ago I had seen Star Wars in Concert which was just a few snippets of each movie with an orchestra playing that scenes specific score, so I sort of knew what to expect, but this one was a whole other level.

Something about being able to experience Harry's first year at Hogwarts with the live music made it that much more magical. You were really able to feel the music in a way that's new and exciting; you feel the music build in happy moments and feel extra anxious in the darker ones. It really makes you appreciate just how amazing John Williams' score is. He's composed music for some of the greatest movies and his work is always top notch, but being in the same room as it, hearing it fill into every crevice around you, is really something else.

It was also super fun because before they started, the conductor told the crowd to be as interactive as possible. He wanted us to cheer for the characters we liked, boo the ones we didn't and act as if we were just regular students at Hogwarts, just part of the story, and it was so great. 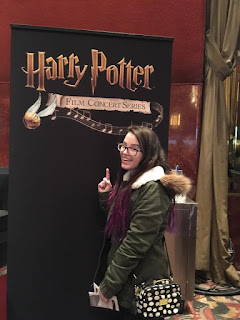 At the end of the show, they announced plans of doing the rest of the series in this same way, so if you're a huge Harry Potter fan like me, definitely check it out here for more information about the shows!
Posted by Heather at 2:20 PM 2 comments: