I woke up this morning to a big ol' blizzard outside. Now, normally I wouldn't need any reason to just sit inside and read, but something about having 14+ inches and more still coming down, makes me feel justified in doing just that.

You guys might know that I've done a book haul a couple of times before, and since I received a few Barnes and Noble gift cards for Christmas, I figured I'd keep this going. Plus, I'm super nosy and love watching haul videos/looking to see what people buy, and I thought you guys might like it, too!

As always, if any of you are reading anything good, please let me know! :] 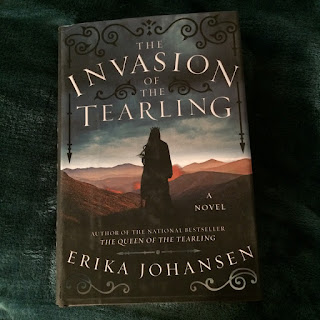 1. The Invasion of the Tearling - Erika Johansen: This is the sequel to The Queen of the Tearling, and focuses on the young Kelsea as she comes into her own and assumes the responsibilities as Queen of the Tearling. In the first book, she crosses the brutal Red Queen of the neighboring kingdom of Mortmesne when she stops the shipment of slaves from being sent. This obviously pisses the scary evil queen with the dark magical powers (because of course she has to have dark magic -- she's an evil queen) off, and she decides to invade the Tearling and y'know, pillage, plunder, take back what's hers, all that stuff. While getting ready for the attack, Kelsea finds herself drawn to a mysterious woman named Lily, who's story may be the only thing that could not only save the kingdom, but Kelsea herself. 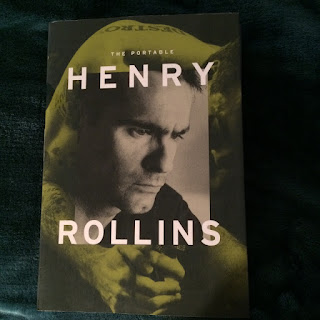 2. The Portable Henry Rollins: I've always been a huge fan of Henry Rollins -- I don't care if it's Black Flag, The Chase, or even 10 Things You Don't Know About, if it has to do with Rollins, I'm down. I have other books that he's written, but this one takes the best of all of them (including some new photos and stories) and rolls it into one beautiful yet heartbreaking, funny yet eye-opening, in-your-face, can't-put-down, walk through Rollins' head. 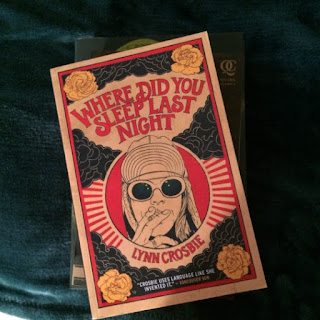 3. Where Did You Sleep Last Night - Lynn Crosbie: I was initially drawn to this book because of the Kurt Cobain imagery and that that's one of my favorite Nirvana songs (I know it's technically a cover, but whatever.) Then I proceeded to read how it was about a teenage girl who decides to start a relationship with the spirit of the dead frontman, and I knew I was going to love it. Evelyn Gray is a young girl who overdoses and while she's in the hospital, swears that the spirit of Kurt Cobain comes to her, hitches a ride in the body in the bed next to her, and the two run off and go on a wild chase for fame and freedom. They end up finding musical fame (because, duh, one is possessed by Kurt freakin' Cobain) but end up being torn apart by passion and jealousy, and you get the idea. It's basically an episode of Behind the Music in book format. 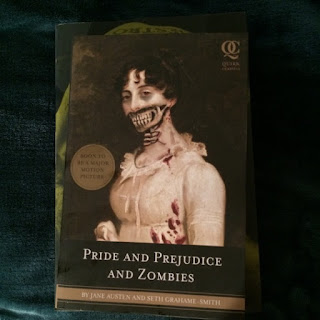 4. Pride and Prejudice and Zombies - Seth Grahame-Smith: I love Pride and Prejudice. It's my go-to snowy day movie actually, and I do love me a horror aspect, so adding zombies is like adding a little cherry on my already lovely sundae. This one is pretty much self-explanatory: you've got Elizabeth, you've got Mr. Darcy, but you just also so happen to have a plague that forces all the dead in Meryton to rise and start munchin' away on people. I've been meaning to pick this one up for a while now, and I figured what better time than right before the movie comes out. Side note, has anyone seen the trailer yet? I'm diggin' it. 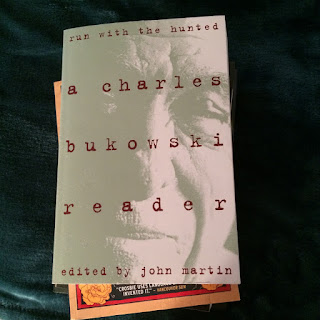 5. Run With the Hunted - Charles Bukowski: Here's another one of my favorites. I love Bukoswki; he's crass, he's a drunk, he's an angry old man but he's entertaining. This is another one that takes the best poems, short stories and novels and puts them all together in one place. The book almost reads as a biography of Bukowski's work, starting from the early years and working your way through all the milestone highs and lows of his life. This would be a good piece of work to introduce someone to the dirty old man, or just for fans who like to have a collection of everything right at their fingertips.

There is nothing I enjoy more than sitting around at home, watching tv and snacking. Seriously, throw in a cuppa tea and some blankets and it's my perfect night. This all leads me to todays Top 5: the fictional places I would want to hang out with my friends and stuff our faces. 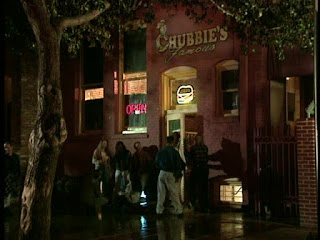 1. Chubbie's Famous (Boy Meets World): Any place where Shawn Hunter is, is a place I want to go to. I've always wanted to have that one spot where all my friends would hang out after school and eat burgers, maybe shoot some pool (which I probably would never do, but I like the option of it being there if I ever got a hankerin'), and for the kids of John Adams High, Chubbie's was it. I would probably get a bit intimidated ordering since all first time customers had to order in code for Chubbie to serve them, but Cory made those little clown burgers seem way worth it. 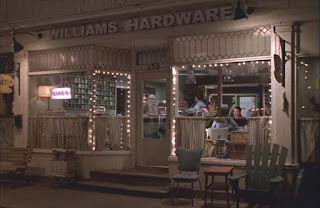 2. Luke's Diner (Gilmore Girls): Diner food is my favorite food. My dream would be to eat so many diner fries my stomach bursts, and I feel like Luke's would have the best ones. Y'know the ones that are perfectly crisp with just the right amount of grease. Plus, who wouldn't want to hang out there watching all the antics that the people of Stars Hollow get into? 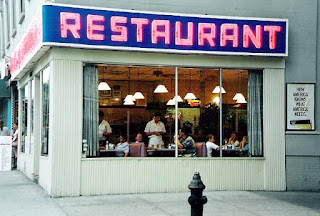 3. Monk's Cafe (Seinfeld): I guess I always could eat at Monk's because the actual diner that they used as the front is in NYC, but it just wouldn't be the same. I feel like I just wouldn't get the full experience without Jerry, Elaine, George and Kramer there to eavesdrop on. And I would finally get to try the "BIIIIIIIIG SALAD" that George was going on about. 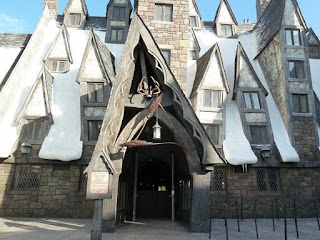 4. The Three Broomsticks (Harry Potter): This may be cheating because I technically ate there last year when I went to Harry Potter World, but oh well, I would eat there every day if I could. Not only would you most likely be running into the famous trio downing some butterbeer in between saving the day, but you could also eat the best Shepherd's Pie (really, it was so good. I'm drooling just thinking about it) and if that doesn't seem like the best time ever then you're crazy. 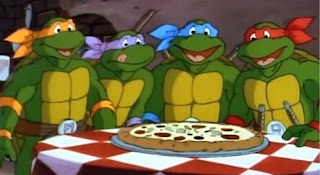 5. Just any pizza (TMNT): While you can bet that it wouldn't be a dining out experience, you can bet on it being the best pizza you've ever had. I will go on record saying that I think New York has the best pizza; I was raised on it and I will be loyal to it till the day I die, and these 4 get that. Doesn't even matter if it's all cheese or pepperoni, we would have the best pizza party ever. Best part, though-- once we're done eating we could all skateboard through the sewers, fight off some foot clan members and then with all the calories we just burned, eat some more pizza.

Let me know some of your favorites!
Posted by Heather at 6:48 PM 2 comments:

Hello and happy new year everyone!

I know it's been a while since I last posted, but I wanted to enjoy the holidays and spend some time with friends who were in town. Now though, let's get back to business! Today, I spent the morning at the Cradle of Aviation, which is mainly an aviation museum on the Island but every so often they do these little cool one off exhibits, and they just opened one of old school arcade games. I remember spending a lot of time growing up at arcades. Whether it was spending hours with my best friend playing Jurassic Park (we would literally not give up that game until we had beaten the entire thing), challenging everyone at SkeeBall or throwing as many balls into Feed Big Bertha's mouth as fast as I could.

The exhibit, called The Arcade Age, delves into the history and influence arcade games had on our culture, their importance and then their eventual decline. The best part of the exhibit is that you can actually play all the games, and they have everything ranging from the 1970s through the 1990s.

When I say they have everything, I mean everything. They have classic Atari games like Star Wars and Centipede; they also have everyone's favorites like Pac-Man, Donkey Kong and Tetris; cult favorites like Space Invaders and Galaga (I played this one the most, I forgot how much I loved it!); and the ones I spent all my coins on when I was younger, Mortal Kombat, Street Fighter II and Double Dragon.

If you're a fan of video games or simply just want to relive your childhood, this is definitely an exhibit you should check out. Tickets are $24 for 90 minutes of unlimited play time. You can check out more information here!

I tried to take some pictures for you guys, but really I just got too into playing everything haha, so here are just a few: 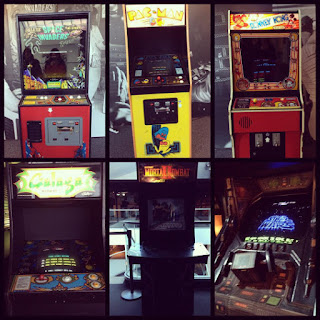 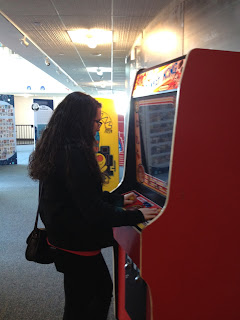 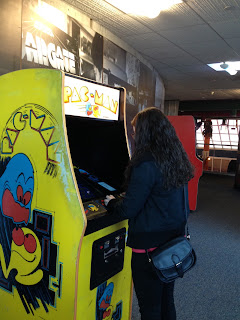 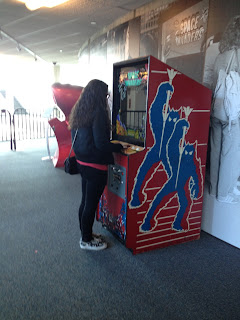 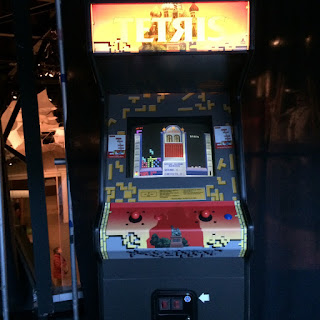 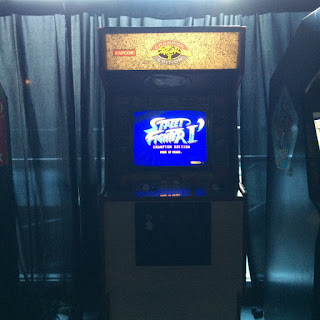 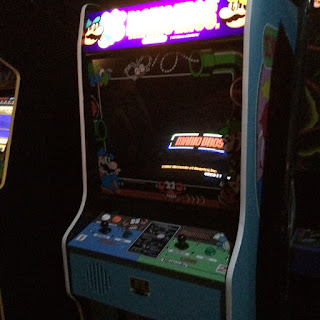