Please, please tell me you all have seen this absolute beauty. I've been waiting for the day that this trailer would be released and crossing all my fingers that it wouldn't look super cheesy, and lemme tell you, I'm not disappointed. I spent the majority of my day yesterday just sitting in front of my computer replaying this, and I am not ashamed to admit that.

What's not to love? You've got a new rolly droid who I already think is adorable, Stormtroopers looking like they're about to go into battle, what I hope is Leia and Han's daughter, some X-wings, a super cool upside down cross lookin' lightsaber, and the Millennium Falcon all set over some ominous voice. Who's voice is that? Does anyone have any theories? I have a few of my own, and I would really like it to be next December now so I can spend all my money seeing this over and over.

What do you all think of the trailer?
Posted by Heather at 3:30 PM 2 comments:

One question that I always find myself thinking about is who would win in a fight: Jack Burton or Snake Plissken. Every time I’m watching Big Trouble in Little China, I think, “Oh, Jack would totally win”, but then I’ll watch Escape from New York/L.A. and I think to myself, “What am I crazy?! Snake could definitely take Jack!” I know some of you may be thinking, “Heather, how does one choose which Kurt Russell is superior?” So let’s break it down:

Jack Burton, a sort of doofy truck driver, has to rescue two green eyed ladies from the clutches of the creepy David Lo Pan.

Snake Plissken, a former war hero turned criminal, has to enter into the heavily guarded maximum-security prison of Manhattan in order to rescue the President.

Winner:
Even though Snake has a huge job of saving the President and making sure he gets to the super important summit meeting, Jack gets the babes.

Jack uses both a TEC-9 and a knife that he so cleverly keeps in his boot.

Snake uses everything from modified Mac-10s, .357 Magnums and throwing stars.

Winner:
Obviously, Snake. His time in the war gave him an extensive knowledge of how to handle different varieties of weapons and he does not hesitate to use them.

I think the only real shot Jack actually landed was when he threw his little knife into Lo Pan’s head. (It's all in the reflexes.)

Again, Snake is a military man who mows down anyone in his path.

Winner:
Snake. I wonder how that makes Jack feel losing to a guy with only one eye.

Jack has Wang, who despite his size has insane martial art skills.

Snake has Cabbie, whose name says it all, he drives a cab.

Winner:
Jack. While Cabbie is sitting around complaining, Wang is kung fu fighting and he is fast as lightning.

Jack has to go up against David Lo Pan, an ancient magician who shoots light from his mouth and has really long fingernails.

Snake has the Duke of New York, who basically rules the entire city.

Winner:
Snake. Not only does the Duke run the whole city, but also Isaac Hayes plays him. As in Shaft, can ya dig it?

Jack has the Chang Sing, who are a group of martial arts experts, and the old wizard Egg Shen.

Snake has Brian and his girlfriend.

Winner:
Jack. Brian talks a big game about knowing the layout of the minefield on the bridge, and then proceeds to blow his own ass up on one; Egg has a Six-Daemon Bag and potions.

Jack has to deal with the Wing Kong, more kung-fu guys; the “Three Storms”, who are just supernatural martial arts guys; the Lords of Death, a Chinese street gang; and a variety of other monsters and a floating mass of eyeballs.

Snake has the Crazies, the sewer dwellers who are much like C.H.U.Ds; a big bald wrestler dude; and oh yeah, an entire island filled with violent prisoners.

Winner:
Snake. Jack may have had all the weird magic stuff to deal with, but Snake has to deal with C.H.U.Ds and no one wants that.

Jack has his trusty semi the Pork Chop Express.

Snake has the fancy Gull Flyer, which is a super stealthy plane.

Winner:
Jack. Snake’s plane may be cool, but Jack’s baby can hit 6.5 on the Richter scale.

Jack’s got the 80’s jeans with a Buddha/snake/sun tank top.

Snake’s goes for the more subtle black tank top and what looks like snake skin leggings.

Jack does the best he can to keep it together under unreasonable circumstances.

Snake answers everyone who says that they thought he was dead with the oh so emo response of “I AM dead.”

Winner:
Snake. How can you argue with that kinda conviction?

Jack has some pretty sweet one-liners, “Son of a bitch must pay!”

Snake not only escaped from New York, but L.A. as well.

Overall: Sorry, Jack, but it looks like Snake may have just swept the floor with ya.

So, there we have it. Based on these statistics, it looks like Snake could totally take Jack in a fight. Do you agree? Let me know!

I don't know about anyone else, but I love nerd related artwork and I'm also really into tattoo art, and I feel like I found the Holy Grail in the Etsy shop Parlor Tattoo Prints (here ), run by the insanely talented Quyen Dinh. You can find everything from traditional tattoo flash to the best fan art you have ever seen.

All prints are done in a flash style and they're all so good that if I didn't have them on my wall, I'd probably get them tattooed on me. Let's be real here, I would get them tattooed on me regardless, cause they're just that wonderful. I'm constantly restraining myself because I want to buy every single thing in her store. They're all reasonable priced (also, the store takes both PayPal and credit which is super convenient), ship fast and are just amazing pieces of artwork. This is definitely a must if you're looking for really unique, awesome nerd art to spruce up your place.

Here are the ones I have so you can get an idea of how fantastic they are: 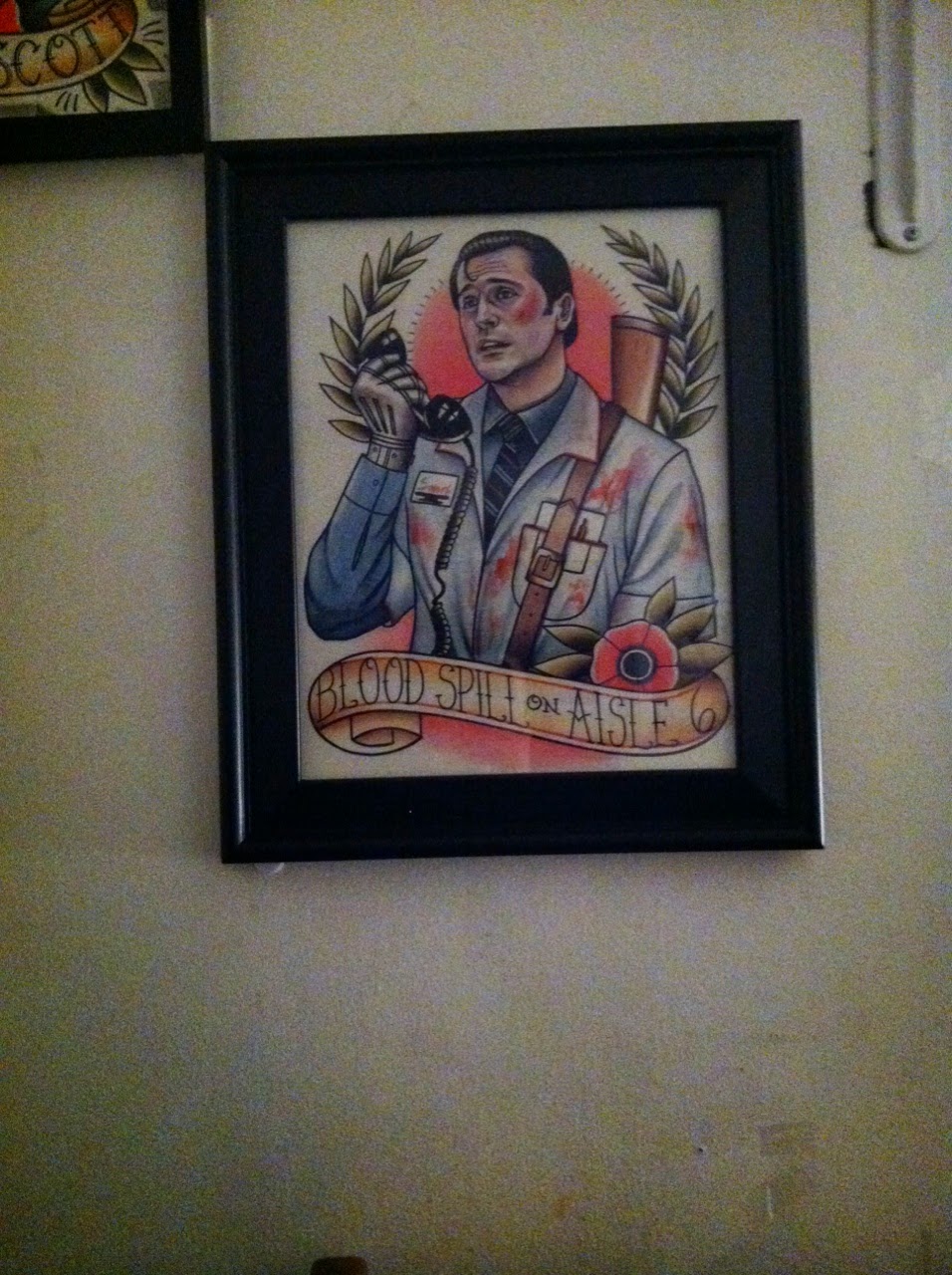 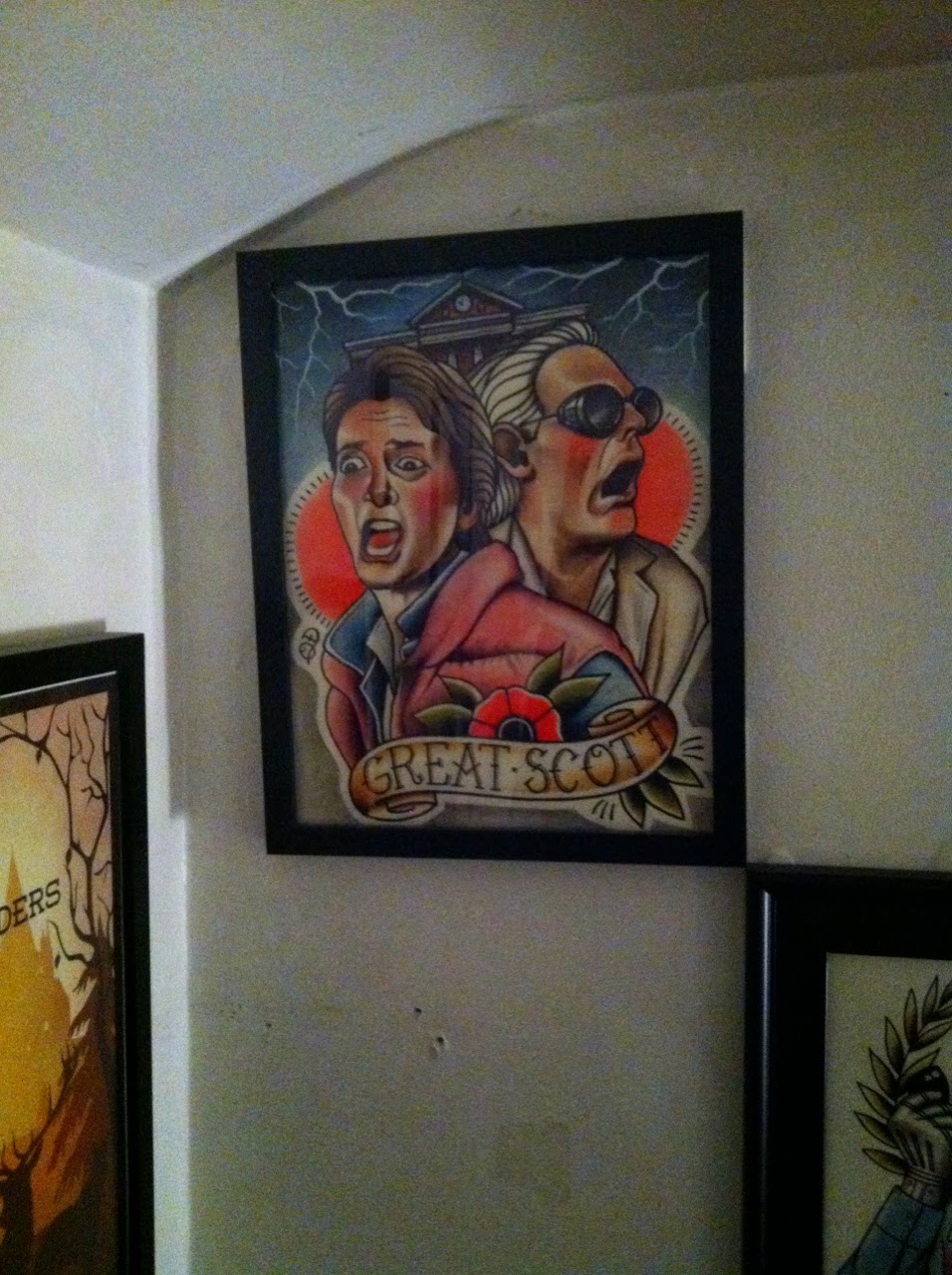 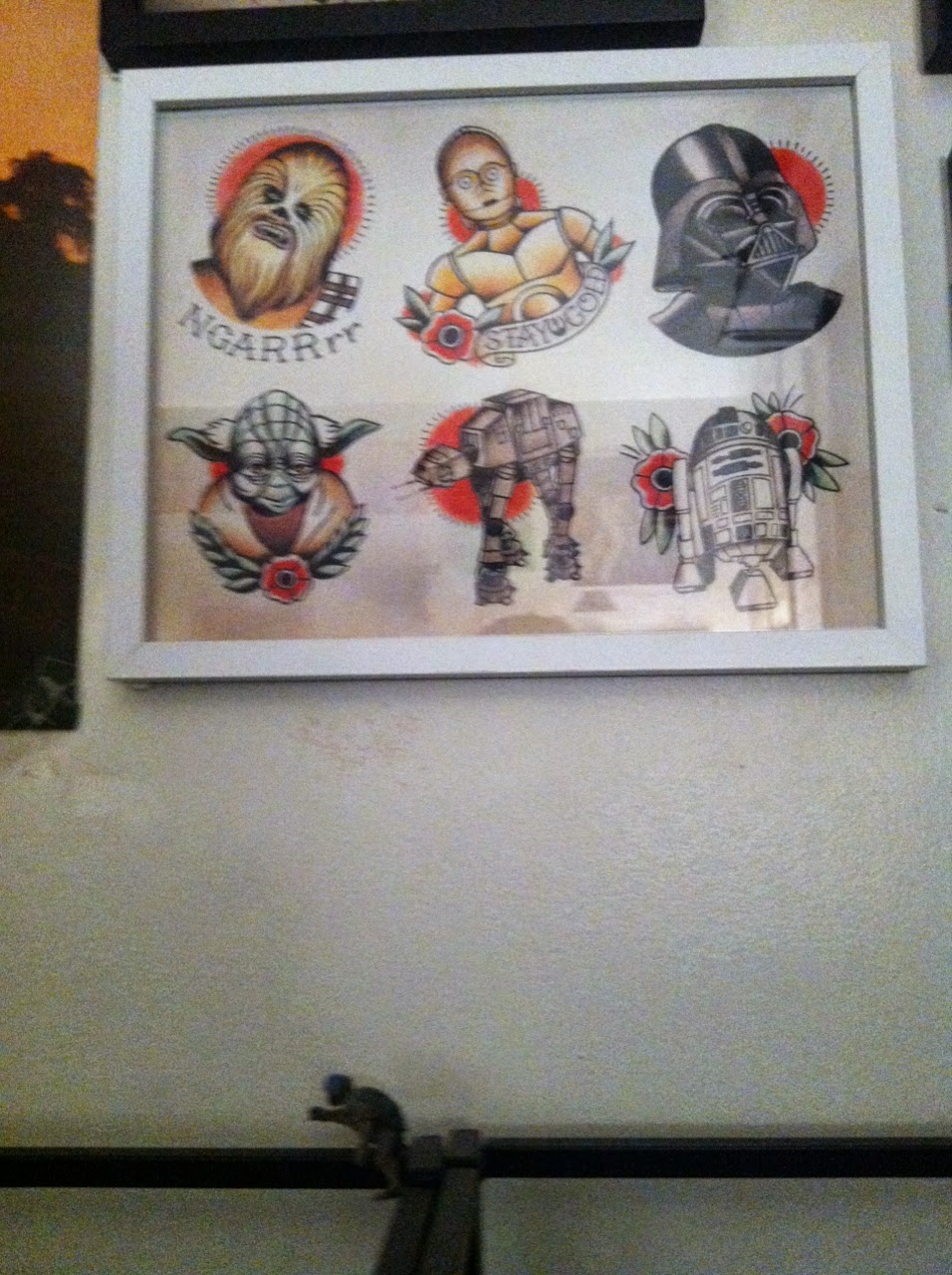 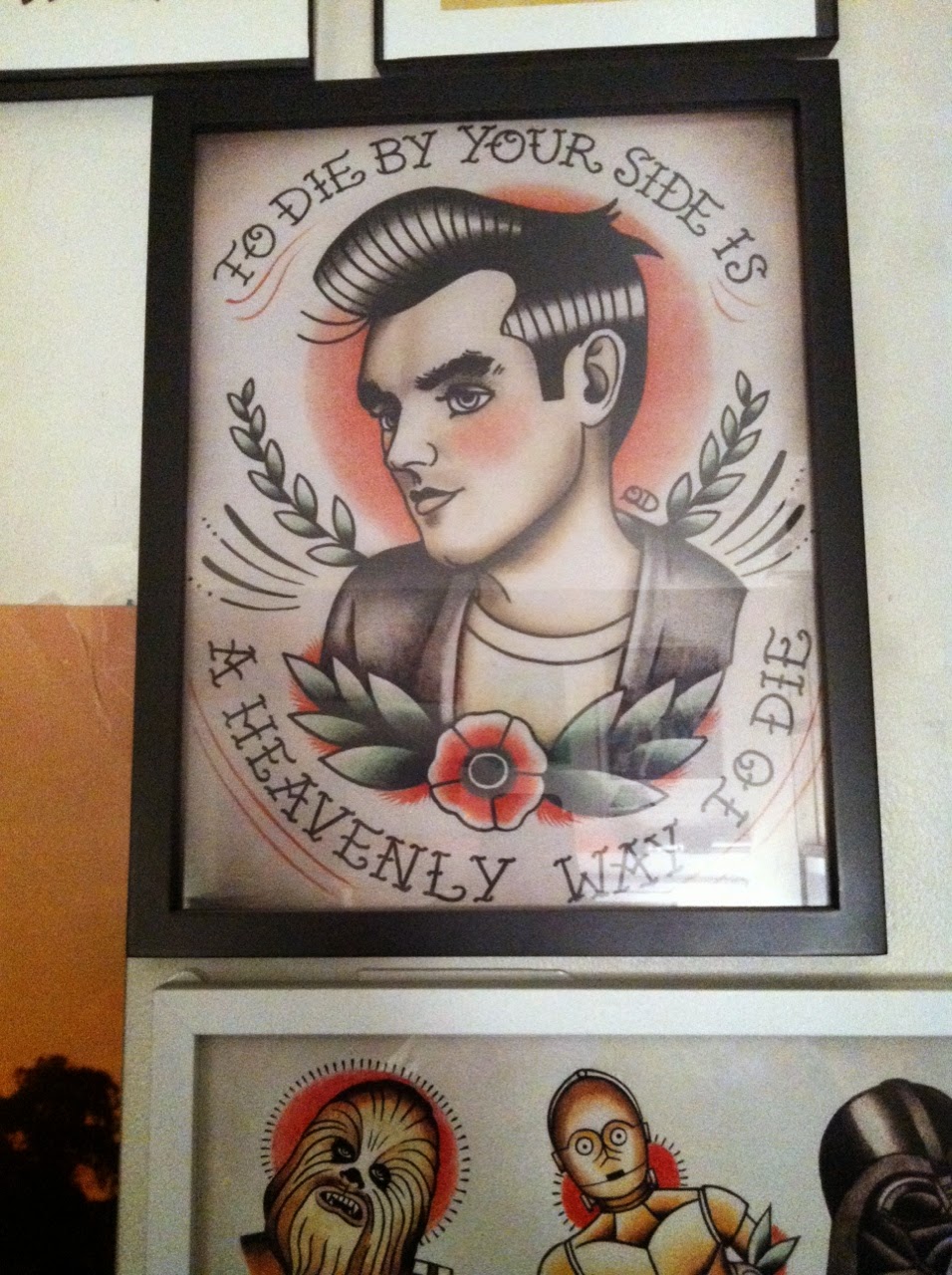 I don’t know if any of you have noticed, but I tend to like making lists. I decided to dedicate this one to my love of sci-fi spaceships. If I was ever given the opportunity to travel through space, these are some of the babies I would want to go on:

Moya: Being a living Leviathan ship means Moya basically can maintain herself, with the help of some DRD’s and Pilot, of course. And yeah, she started out as a prison ship, but she became so much more than that. She was always there for John and co. and I think really cared for all of them. Plus, Starbust is really freakin’ cool.

Red Dwarf: This mining ship has the ability to take all the hydrogen that’s in space and convert it into fuel, which means that it could keep on truckin’ for-ev-er, and seeing as how it’s been going for more than 3 million years, I’d say it’s doing a fine job of that. Sure, the entire crew was killed due to a radiation leak thanks to a faulty drive plate, and the only survivors were the ship’s computer system who’s gone a bit wonky, a cat/human hybrid, a mechanoid Kryten, a hologram of the smeg-head Rimmer who died in the blast, and the curry loving slacker Lister who wakes from suspended animation to find he’s the last human ever, but they’ve been to parallel universes and the ship has a virtual reality simulator room so that more than makes up for it in my book.

Serenity: This ship is the heart and soul of its crew. They treat her like she’s one of them and she is; Mal said it best, “Love keeps her in the air when she oughta fall down, tells ya she’s hurtin’ ‘fore she keens. Makes her a home.” All the crew-members put their own personal touches everywhere and that’s what makes it feel so real and adds to the charm. Plus, I just would really like to be part of Mal’s crew.

TARDIS: Like I could possible talk about spaceships without mentioning the TARDIS. Who doesn’t wish they could travel throughout time and space and other dimensions with the Doctor? It’s bigger on the inside, regularly undergoes interior designs and is so unlike anything else. Just the wheezing sound of the brakes is enough to get me all giddy inside.

Millennium Falcon: There are so many amazing ships to pick from in the Star Wars universe: you’ve got the X-Wings, Boba’s Slave I and the SSD Executor’s (which totally look like flying pizza slices), but I, like many others, was drawn to the Millennium Falcon. Not only can it easily maneuver through asteroid fields, Death Stars and Exogorth mouths, make the Kessel Run in less than 12 parsecs, but it can also in a pinch be used as gambling currency. She may look like a hunk of junk, but she’s got it where it counts.

The Satellite of Love: It’s shaped like a bone, has a crew of man-made robots and plays terribly cheesy movies which you and your robot pals can mercilessly mock. Sounds like an all around good time to me!

What are some of your favorite ships?