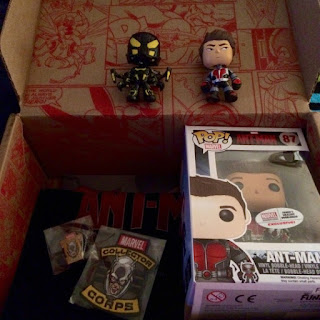 I'm sure by now you've all realized how much I love collectibles and toys, so I figured I'd tell you about my new obsession: Marvel Collector Corps.

My first little foray into nerdy subscription boxes was thanks to my sister-in-law who had gotten me a 3 month subscription to Loot Crate last year. I had continued with it for a few months and I did like it, but it got to the point where I would only really like about one or two things in the box, so it kinda ended up being a waste.

Then I heard about this one which was solely based around Marvel items and I knew I had to sign up. Unlike Loot Crate, this one is bi-monthly, but it has the same premise of one specific theme per box. This one is the second I've gotten, the first one was centered around the Avengers and came with the best Funko Hulkbuster figure. That's what also completely sold me on this subscription- I freakin' love Funko figures, and one comes in every box.

Along with a Funko figure, there's a shirt, a comic, a pin and patch, and a few other bits and bobs. This Ant-Man one also came with two blind box toys (which are exactly how they sound, you don't know what's inside until you open it) which ended up being Yellowjacket and Scott Lang.

Basically, you spend $25 for the subscription and every other month you get sent a box containing $50 worth of Marvel/Funko collectibles which are only available in said box. I'd definitely recommend checking it out if you're a Marvel fan or just a fan of fun stuff.

Check out more on the website, here!
Posted by Heather at 2:00 PM