I recently went to Barnes and Noble and spent a ridiculous amount of money, as per usual, so I figured it might be fun to do a little post about what I got. And, here we go! 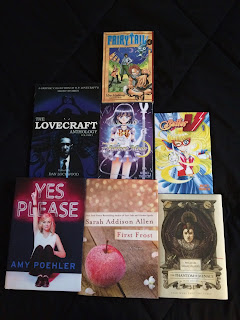 1. Fairy Tail #4: I started reading this because of one of my co-workers. He and I bonded over our mutual love of Sailor Moon, and he told me I had to read this series. He started telling me about it, and all he got through was that it was about a wizard guild and there was a talking cat, and I was sold. There is so many in this series that I haven't even scratched the surface, but I like it so far.

2. The Lovecraft Anthology Volume 1: I started reading H.P. Lovecraft when I was in about middle school after someone mentioned I should since I love all things weird and creepy. This is a collection of his stories done in a graphic novel style and it's amazing. I found it nestled all the way in the back of one of the shelves and quickly grabbed it. The artwork is amazing and I'd definitely recommend picking it up if you're a fan. I hope there's other volumes because I'm gonna need all of them.

3. Sailor Moon #10: I've always been a huge Sailor Moon fan. I used to wake up at 6 in the morning on Saturdays just to watch the cartoon, I would run around screaming along to the theme song (which is so great, by the way), and to this day, I still wish I was Sailor Mars. After saying that, I'm a little ashamed to admit I only started reading the manga a few months ago, but I love them. I was also pretty surprised with just how much the cartoon followed along with them. If you were a girl (or a boy!) growing up in the 90s and you didn't watch Sailor Moon, firstly--what were you thinking?, secondly--get these because they're the best.

4. Codename Sailor V #1: This is basically just following the story of Sailor Venus. I don't know if the B&N by me just started stocking this because I haven't seen it there before, but I just had to pick it up. Everything I just said about the above Sailor Moon manga applies to this one too, just pick it up Moonies!

5. Yes Please- Amy Poehler: I just love Amy Poehler, I think she's great. A lot of people I know read this and said it was really good, I'm not sure what's taking me so long to pick it up, but better late than never! I also heard she mentions Fugazi and Ian MacKaye in it which I'm all about. Fun fact: I used to work at a college which she and Tina Fey (my doppelganger) used as a home base for a movie they were shooting and she walked past my office while going to eat lunch. She's like a tiny little ray of sunshine.

6. First Frost- Sarah Addison Allen: The one thing I really like about her books, is she always adds an element of magic to her characters. It's nothing so over the top where it comes off as cheesy or unbelievable, but almost like Practical Magic-esque subtle little quirks. This book follows the same characters as in her book Garden Spells, only this one takes place 10 years later. It's nice to revisit these characters and see how their stories have played out and whatnot.

7. The Phantom of Menace- Ian Doescher: In simplest terms, this is the retelling of Star Wars done in a Shakespearean style, and I love it. I read all of the ones he's put out for the original trilogy and was a big fan of those, so I had to pick this one up as well. I have to admit though, Shakespeare doesn't make Jar Jar any less annoying. I also really like that there's drawings every few pages depicting the characters/scenes in the same sort of Shakespearean style which is fun. I wish these were around when I was in high school, they would've made that time in English class way better.

If any of you are reading anything good, let me know! I'm always up for suggestions.
Posted by Heather at 2:00 PM