Top 5: Movies You Should Watch This Time of Year

I figured since I did an updated Top 5 of zombie apocalypse team members, it was only right to do an updated movie list for Halloween (original post here).  It was super hard to narrow it down to just 5 because I love so many creepy/campy/Halloween-y movies, but without further ado, here's what I came up with for your next spooky night in: 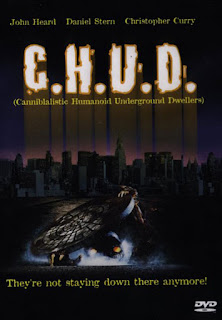 1. C.H.U.D.: I have to admit, I only watched this movie because of the name. How can you resist something when the name means Cannibalistic Humanoid Underground Dwellers?! Turns out, it was pretty good. It's about the homeless who start to go missing in New York City and you find out they're being preyed upon by these monsters who used to be human but were mutated by this radioactive toxic waste, and it's up to a photographer, a reverend and a cop (I know, it sounds like the start of a terrible joke) to help save the day.

2. Killer Klowns from Outer Space: I love this movie. It's definitely one of my favorite horror movies, not because it's scary but because it's so campy. I mean, come on, you've got a comet that brings a circus tent with murdering clowns in it to Earth. And if that's not enough, they put their victims in cotton candy cocoons, AND they have popcorn guns which turn the popcorn into monsters. It's brilliant! I will admit though, I've never been a fan of clowns and this movie does help solidify that fear, but it's mainly just really funny and the title song is so catchy.

3. The Lost Boys: Ah, the Coreys--Feldman and Haim, what a perfect duo you were. I used to watch this movie constantly, in fact, I still have a movie poster of it hanging on my wall. It also has no shortage on the camp factor, remember the part where one of the vampires gets pushed into a bathtub filled with holy water and garlic and basically disintegrates? Buffy should've totally stolen that one.

4. The Rocky Horror Picture Show: I still remember the first time I ever saw this movie. My uncle was watching me and my brother, and his friend was having a Halloween party and this was on the TV. I remember I was instantly in awe of it and my uncle told me not to let my mom know I watched it. Fast forward to high school and me spending most of my October weekend nights watching two of my very good friends play Frank N. Furter and Brad in the midnight showings at a local playhouse. I've always wanted to go to the showings in the city where you get to use the props and the call outs and everything, it seems like it'd be so much fun. Everyone should watch this movie simply because it has Tim Curry in fishnets and pearls, and he works. it. out.

5. Elvira: Mistress of the Dark: Here's a little fun fact for you-- I've always wanted to be Elvira. I grew up idolizing her because she was sassy and a horror hostess, and I wanted my own show where I'd play B-movies while lounging on a red velvet couch (though I'd wear a bit more clothes). I've been talking about campy-ness a lot in this list and this is the Mother of them all. This is a good one to watch if you just want something funny but still in the Halloween spirit.

What're some of your picks? Or what's one movie you always watch around Halloween? Lemme know!