I've done it, guys. I finally made it to my first NYC Comic Con. I've been to other conventions before, but I've never been to the NYC one. I've tried to go for years, but I've always been too late to buy tickets. This year I was beyond prepared--I set up notifications on my phone, I had the website set up and ready to go for like an hour before they even went on sale, and then four and a half hours later, I got my tickets.

I only bought tickets for the Friday date, and despite it pouring rain and the fact that every joint in my body has been swollen and in pain for weeks now (yay developing possible arthritis at 26 years old!--__--) I had such a great time. My brother and I took a 6:13 am train into the city because we both wanted to hit the very first panel of the day and we're both very paranoid about being late to places. After meeting up with two of his friends, we set out to find the shuttle that takes you straight to the Javits Center, which is where the convention is, and when we had no luck on that front, decided to walk the 15 or so minutes instead.

By the time we got there, it was about 8:30 and they ushered us all into the downstairs of the building where they have rows upon rows lined up for you to wait in, kinda like herding cattle, and they have it split into those who just wanted to go straight into the showroom floor or those who wanted to get wrist bands for panels. We went onto the lines for the panels, and thus our waiting began. I found throughout the entire day, it's very much a whole "Hurry up to wait" type of thing. We rushed to get there first thing in the morning, only to then sit on hard concrete floors until a panel which didn't start until 11 am, and you could totally tell who had done this before because some people came with their own chairs and everything, I was super jealous.

Once it was finally time, we went rushing into the main room for the Dark Knight 30th Anniversary panel. The whole panel was based around, you guessed it, the anniversary of the Dark Knight comic. The speakers were mainly artists from DC who either worked on the original, or are working on the upcoming installment of the comic. Oh, and when I say artists who worked on the original, I mean none other than Frank Miller. Let me just say that one more time, Frank. Miller. The man is an absolute legend and had such a dry sense of humor when he was talking and answering questions, it was hilarious. 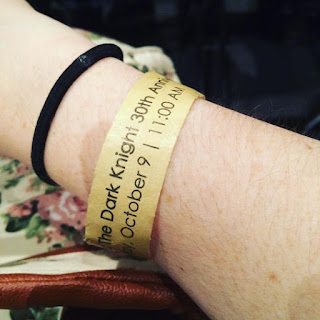 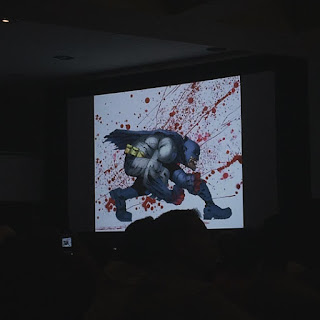 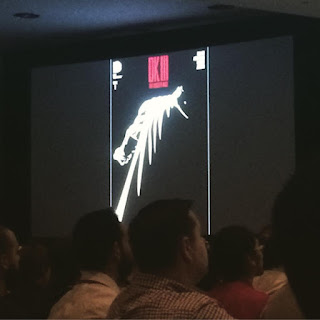 They showed us some of the pages from the original comic, as well as some of the rough drafts for the newest installment, and it was so cool. They spoke about how aside from the actual comic itself, they're incorporating mini comics into each issue which are sort of stand alone stories with different characters, but they still have elements that tie everything together. It was so great hearing from people who've worked on one of my favorite characters talk about how much Batman means to them as well, and hearing their ideas on where they're taking the story was just so exciting and such an awesome start to the day.

After the panel, we went upstairs to walk around the actual place and see all the booths and whatnot. I have to admit, I didn't take many pictures of the exhibits or anything like that, mainly because I was so in awe of everything. It was more than a bit chaotic, there's so many people jammed everywhere you turn which makes it super hard as well. It took me almost a half hour just to find two of my friends who were there, and we weren't even that far apart! There were so many really great cosplays as well too. In my head I was counting all the Jokers and Harley Quinns that I saw, but actually the ones I saw the most were of Barf and Lone Star from Spaceballs and I was so pumped on it.


They had a Doctor Who section with a huge TARDIS that had UNIT soldiers standing guard, there was a Star Wars prop section and even a Jelly Belly booth which had artwork that was made completely out of jelly beans. 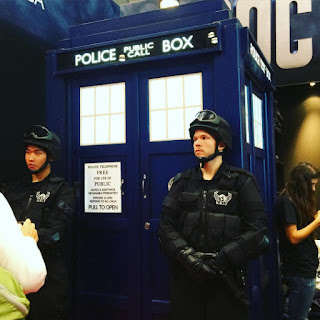 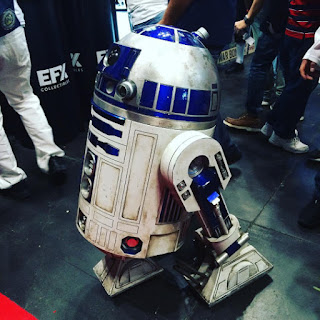 Next we hit up the artist alley, and there were so many amazing prints that I wanted to get but sadly I have no room for them. My brother wanted to find the booth for Cyanide and Happiness, which are those comic strips which are slightly dark and funny, because he really wanted to get a piece commissioned. Once we found it, we saw that if you bought a certain amount of merch, they would draw you whatever you wanted. So he had them draw him beating up one of his friends from work (who is also a huge fan) in sort of a Mortal Kombat style, which he plans to hang up in the middle of their desks, and it looked awesome. 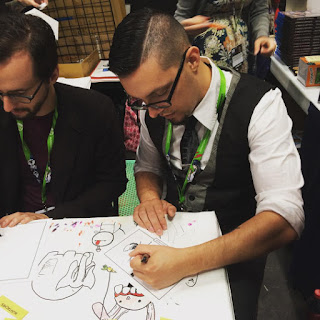 To end the day, we went to the Once Upon a Time panel which was titled An Evening with the Dark Swan. Basically, they showed this coming Sunday's episode and then the last 10 minutes or so the creators Edward Kitsis, Adam Horowitz and Emma Swan herself, Jennifer Morrison, came out to answer any fan questions. 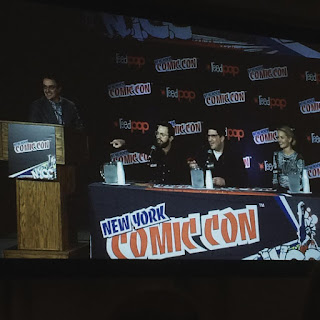 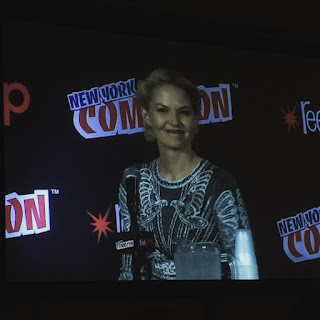 Also, let's all applaud the fact that for once, I didn't spend an incredible amount of money on things. I think that was the biggest surprise of the day, the fact that there really wasn't much that made me go, "OH MY GOD, I NEED IT." I knew that an artist I liked was going to be there selling prints, so I only really went in wanting to buy that (which is the BTTF print below by Scott C.) and the other two things I just couldn't pass up (Doctor Who and MST3K mashup? Yes, please!). Needless to say, my wallet was very happy! 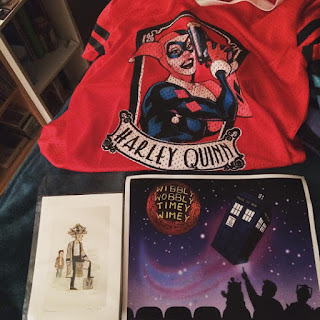 All in all, it was such a fun awesome experience and I would love to go again. Even though it was a very long tiring day and I was in so much pain by the time I finally got home, it was worth every minute of it.

Have you guys ever been?