New Book by Elvira, Mistress of the Dark 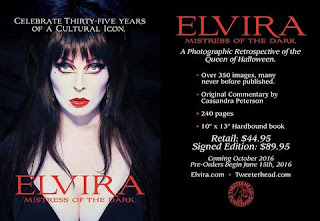 Growing up, I always wanted to be Elvira. I've always loved campy B-horror movies, and the fact that she had her own show which was based around all that, little Heather was like 'Yes, this is what I want to do!' Needless to say, that didn't happen (probably because I could never pull off an outfit such as hers), so instead I settled for sitting in my room watching the Mistress of the Dark movie over and over. Now, cut to me at the beginning of the month when I found out that she was coming out with a "coffin table" book.

The book, which details the ghoulishly glamorous 35 year career of Cassandra Peters (aka Elvira, Mistress of the Dark), was released on October 5th through Tweeterhead Publishing. The deluxe 240 page retrospective includes commentary from Peters, as well as never before seen pictures of her early modeling career, pictures of her while she's pregnant with her daughter, and even showcase how Peters has aged her cult persona.

It's amazing how 35 years later, people are still loving this character that Peters has created. She still regularly goes to conventions and has a widely popular Halloween horror show at Knott's Scary Farm every year.  Elvira, Mistress of the Dark is available in two different forms: a standard and a signed copy, and can be purchased through the publishing company here.

Email ThisBlogThis!Share to TwitterShare to FacebookShare to Pinterest
Labels: books, Elvira Mistress of the Dark