Yesterday marked the 20th anniversary of one of my favorite tv shows, Buffy the Vampire Slayer. This show came out when I was 9 years old and completely blew my mind. It was truly a game changer for me. I was (and still am) one of those people who actually didn't mind how campy and so-bad-it's-good the movie was, but the tv show really brought a different side out of Buffy and I loved it.

Where the movie was a bit lighthearted and super cheesy (I mean, remember how the vamps died? Or how Buffy tracked them with her cramps?), the tv show ripped out your heart while simultaneously making a witty remark. Everything about the show is great, to the actors to the story lines, everything was just so well thought out.

Now, to honor the show that has been my companion for so long, I figured I'd pick a few of my favorite moments throughout the series. Let me just say- this was the hardest list I've ever tried to make. There's so much about this show that I loved, so I just tried to narrow it down to the very first few moments that popped into my head.

So, in no particular order, here we go!

Class Protector Speech: Everyone knows Sunnydale isn't the most ideal place to live, let alone go to school, so it's surprising they even have enough students for a prom, but it's totally worth it when it comes to the speech Jonathan gives on behalf of the student body honoring Buffy. During his speech, Jonathan tells Buffy that they all know that something is off about their town, but that Buffy is always around to make sure people survive (in fact, their graduating class has the lowest mortality rate in years) and presents her with a bejeweled umbrella. This moment always sticks out to me because throughout the series, we see Buffy second guess just how much of an impact she has, and sometimes doesn't believe anyone even notices, but this little act which was totally unexpected just goes to show how much she is appreciated and just how grateful people are for her.

Buffy vs Angelus: So, we all know Angel and Buffy were kinda cursed from the start- he's a vampire, she's a vampire slayer, buuuuuut he did have a soul so maybe it'd be ok? Say it with me, folks, NAAAAH. Angel's soul comes with some fine print that states if he ever experiences a moment of pure happiness, he would revert back to Angelus, his blood thirsty-torture happy alter ego. And guess what happens? He and Buffy sleep together, he's super happy, and sayonara soul. The episodes with Angelus are some of the most intense. He really shows no inkling of the man Buffy fell in love with and proves it by torturing her and the ones closest to her (I will never ever get over the death of Jenny.) The moment I always think of is in "Becoming, Part 2" when he has Buffy cornered and taunting her about how she's alone, no friends, no hope, and she ends up kicking his ass. This also leads me to the next moment...

Buffy kills Angel: Ugh, my heart. So as Buffy and Angelus are fighting, Willow is performing the spell to re-ensoul Angel, which just so happens to work right at the moment where Buffy has to kill the man she loves. I still can't hear, "Close your eyes" without getting goosebumps.

Anya's Speech in The Body: This entire episode is still hard for me to watch. The emotions each character goes through over the death of Buffy's mom is too much, it's so raw and real. Even though SMG's performance is beautiful in every way, it's Anya's speech that kills me most. Anya is newly mortal, just recently giving up her vengeance demon life in order to be with Xander, so this is really her first brush with how fragile life really is and her asking these simple, almost childish questions because she just doesn't understand is truly heartbreaking.

Hush/The Gentlemen: This is one of my favorite episodes of Buffy ever. It's really a testament to Joss Whedon's storytelling since there's only about 14 minutes of dialog in the entire episode. Also, the Gentlemen are some of the creepiest monsters on this, or any show, and they still creep me out so much.

(One of) Buffy's Deaths: It's no surprise being the Slayer, the Chosen One, has its downsides. One of which is, ya kinda die often. Buffy died a few times during the show, but this one always sticks out for the speech she gives right before sacrificing her life in order to save her sister Dawns. Dawn was a mystical being known as 'The Key' and her blood held magical properties to open portals between worlds. A goddess/hell demon named Glory tried to kill Dawn in order to gain this power, and Buffy quickly realizes that the portal wouldn't close until all of Dawn's blood was spent. She also realized that her and Dawn share the same blood--Summers blood. So, she sacrifices herself so that way Dawn can live, telling her to "Be brave. Live. For me." This moment showed just how much Buffy loves and would do anything for her family. Also, all the reactions of the Scooby Gang, and especially Spike, as they look upon Buffy's dead body is just gut wrenching.

Once More With Feeling: This is another one of my favorite episodes. Each musical number has everything you could want- you have rock ballads like "Rest in Peace", campy duets like "I'll Never Tell" and group numbers like "Walk Through the Fire." This was one of the episodes which aired after the Scooby Gang brought Buffy back from the dead, and hands down the best part of this episode comes from Buffy's confession during "Something to Sing About" that her friends ripped her out of Heaven. Just twist the stake in a little more, Joss.

Awakening Potential Slayers: During the last season, Buffy and the gang were up against the ultimate Big Bad, the First Evil. While maybe not being the most physically threatening of all the monsters the Scoobies were up against, the First was no joke. It destroyed the Watcher's Council, unleashed an army of ancient vampires and hunted down any potential Slayers. This is where it tripped up. When Buffy finds this out, she along with Willow, choose to awaken all the Slayers-in-waiting in the world. Every girl who held the potential to be a Slayer, was a Slayer. It was with the help of these Slayers that Buffy and the gang were able to defeat the First. This also played out more in the comics which followed the end of the tv series, which you should definitely check out if you're a fan.

There are so many other moments I could go on and on about. Like, Buffy telling the Master he has "fruit punch mouth", to when Buffy and Faith switched bodies, to Tara's death and Dark Willow, to Spike's whole transformation from just another vamp to sacrificing his life to help Buffy win against the First, each season had it's own memorable iconic moments. BtVS is one of those shows that will never go out of style. It has a little something for everyone and has a way of bringing people together. I even have friends who I haven't really spoken with in years, but we'll always send each other Buffy related things. Buffy really helped teach me about girl power and how to stand up for what you believe in, to not take any crap from anyone, and to not let anyone make you feel weak for being a girl and for that I am forever grateful. 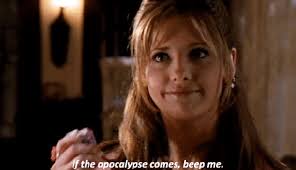 What are some of your favorite BtVS moments? Lemme know!
Posted by Heather at 6:06 PM