Ash vs The Army of Darkness #1 Review

So I think by now everyone pretty much knows that I'm a huge fan of The Evil Dead series. Ash Williams has been though a lot: he watched his friends die, then he watched his girlfriend die and had to cut off his own demon-possessed hand, and then he got transported back to medieval times, but all that's nothing compared to what he's up to now-- teaching World History to a bunch of "hormonal maniacs", aka high schoolers, in Dynamite Comics' Ash vs. The Army of Darkness series. 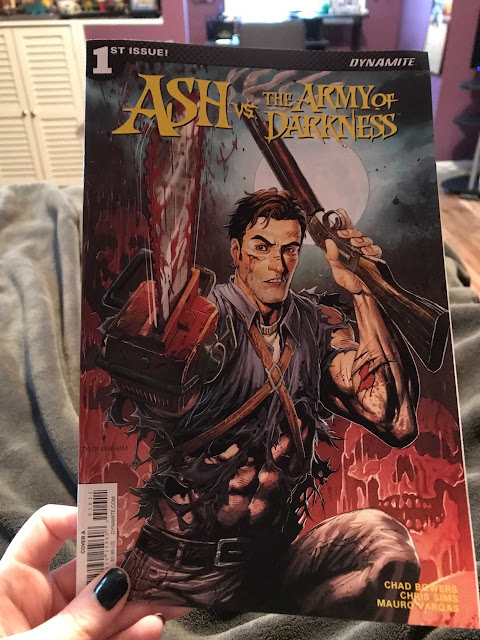 The basic storyline is that Ash has taken a substitute teaching job at a high school in hopes of getting to the bottom of some Deadite activity that's been brewing. The majority of the first issue takes place as Ash is overseeing detention with a whole group of the typical high school stereotypes (ya know, the popular kids, goth girl, etc) or as Ash so fondly calls it "Breakfast Club with the undead." I love the whole interaction between Ash and the kids because you can tell that he's only cool in his own mind and everyone else finds him pretty lame, and I think that's a pretty accurate depiction of his personality. Oh, and if you're wondering if the comic is staying true to the campy/gore factor of the films/tv show, you'll be happy to know that Ash has to defeat a Deadite frog that ribbits out its desire to rip out your soul. Oh. Yeah.

I know the series just started, but I can already tell this is going to be one of my favorites. It's just so freakin' good. Chris Sims and Chad Bowers' writing feels like it's lifted right out of the films, it's so quintessentially Ash that I even heard Bruce Campbell's voice in my head as I read it. The artwork by Mauro Vargas also fits really well and goes along great with the feel of the story so far (side note: major thumbs up for capturing Bruce Campbell's famous chin.)

You can tell that this series has been made by fans of The Evil Dead and who respect the campiness of the series. The story also started and finished with little flashes to what seems to be a government agency who are searching for any activity that's out of the norm that could lead them to the TPO (The Promised One), which of course looks just like Ash, so I'm interested to see where the story goes from here. Other than the storyline, the artwork is fun and stands out, and the writing has all the sass and swagger you'd expect from Ash Williams. I just have 5 words for this series: Hail to the King, baby.