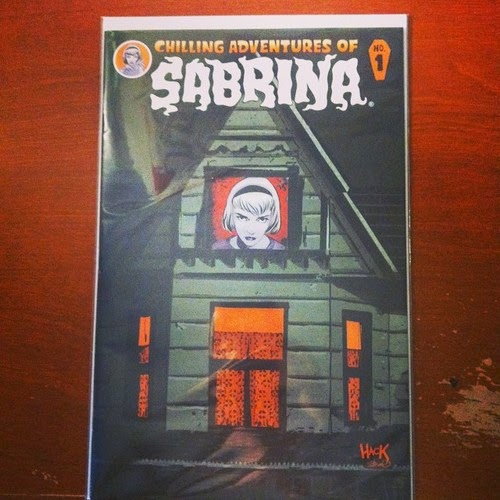 When I was little, my mom used to take me and my brother to our local comic book shop on the weekends and let us pick out whatever we wanted. My brother would go for the latest X-Men or Silver Surfer, but being the youngin' that I was and not knowing much about anything, I would always go for the Mystery Bag. These were brown paper lunch bags stapled shut so you wouldn't know what you were getting until you opened it up. They were never anything too fancy, usually just a bunch of Archie Comics, which means I always got at least one Sabrina the Teenage Witch comic in just about every bag.

Besides being a fan of the comics, I was also a fan of the show, so you can imagine my excitement when I read that Archie Comics was planning on releasing a new twist on the teenage witch titled, Chilling Adventures of Sabrina. Lemme tell you, this is not the Melissa Joan Hart Sabrina I grew up on, this is more like Rosemary's Baby Sabrina, and I'm lovin' it.

This monthly series takes place in the '60s, and tells the story of Sabrina in a way that you've never seen before. In the prologue, we learn that Sabrina was born to a mortal mother and a warlock father. Mixed relations like that don't go over so well with her father's coven, especially his sisters, so her mother's mental health is depleted landing her in a psych ward, and her father seems to get turned into a tree (talk about a tough break). Her aunts then take Sabrina to live in Greendale in an abandoned funeral home across from a cemetery (which is where her aunts get their food from. Diggin' up graves, eatin' corpses-- my, Hilda and Zelda, you've changed). They decide to homeschool Sabrina in the ways of witchcraft, while sending her to normal school "for everything else."

Aside from her aunts and everyone's favorite talking cat, Salem, Sabrina lives with her cousin Ambrose, who left England after a little magical mishap. You can tell that he's a troublemaker when he convinces Sabrina to cast a spell to make the high school heartthrob, Harvey, notice her, even after Salem tells her how bad of an idea it is. So she casts the spell and Harvey asks her out and you just know that nothing good is going to come from this, but we'll have to wait for another issue to find out what.

The Chilling Adventures of Sabrina takes the characters that you know and completely throws you for a loop. It's dark and it's eerie, but it's also funny (I mean, Betty and Veronica show up as witches from a rival coven and summon a succubus, hilarious). The artwork is fantastic and the storyline is great, this is definitely one I'll be picking up again.