So, this past Wednesday marked the 54th anniversary of Rod Serling transporting viewers into the depths of science and the strange with the classic The Twilight Zone. I've aways been a big fan of The Twilight Zone; everyone knows my favorite part of New Years eve/day is the TZ marathon that SyFy always plays. Ever since I was young, I would ring the new year in with both that and The Honeymooners marathons.

In honor of this great programs anniversary, here are 5 of my favorite episodes. Enjoy! 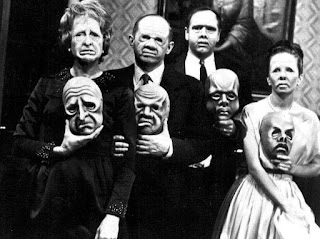 1. The Masks: I think this is where my fear of wearing masks stems from (also that Goosebumps episode, you know the one). Basically, this episode was about Jason, a millionaire on his deathbed who invites his family members over and tells them that in order for them to receive anything from his estate, they must each go the whole night wearing masks that represent how he sees them -- a coward, a buffoon, etc. The family, of course, treats him horribly throughout the night, and once Jason passes, they take their masks off only to find that their faces have all twisted and stayed in the same grotesque shapes, forever reminding them that their outsides now mirror the ugliness inside them.

2. Nightmare at 20,000 Feet: So, not only did TZ make me terrified to wear a mask, I'm pretty sure this is where my fear of flying came into play as well. While on a plane trip, Bob Wilson (played by some dude named William Shatner, maybe you've heard of him) is convinced that there's some sort of gremlin monster out on the wing. Since dear ol' Bob is getting over a nervous breakdown, no one on the plane, not even his own wife, believes him. They all think he's gone coo-coo for Cocoa Puffs. Of course, this just makes Bob's stress and tension levels run even higher, desperately trying to get them to believe that the gremlin's trying to make the plane crash, which then leads him to almost killing himself when he takes a cop's gun and tries to shoot the gremlin off the wing himself. Now, you can't watch this and not think he's absolutely outta his bird, until the plane lands and he's taken away in a straightjacket and you see the damaged wing, and then you feel like a fool cause Captain Kirk was right all along. 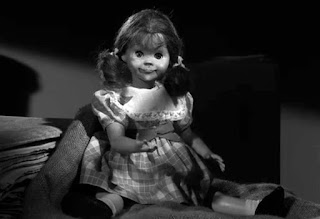 3. The Living Doll: "My name's Talky Tina, and you'd better be nice to me." Gah. No dolls ever, burn them all. 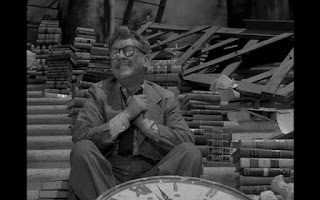 4. Time Enough at Last: Out of all the episodes that deal with loneliness and solitude, none do it better than this one. I felt for the socially awkward bookwork Henry because I saw a little bit of myself in him; I, too, would rather sit and read book after book instead of going about my actual daily life activities. Then one day, he decides to eat his lunch in the vault of the bank he works at and whatdya know? An H-bomb wipes out all humanity. When he finds himself truly alone in the world, he contemplates suicide, but then he stumbles upon his heaven on Earth-- an abandon library bursting with books. He can finally do what he's always wanted to, just sit and read undisturbed for the rest of his days. Sounds like the best time ever, right? *Buzzer sound* Wrong. Just as he goes to pick up his first book, he trips and breaks his glasses leaving him pretty much blind. Now, as someone who can't see two inches in front of them without glasses, my heart just breaks along with Henry and how he's to live out the rest of his days surrounded by everything he's ever loved without the ability to even enjoy it.

5. To Serve Man: Ah, here we have a seemingly peaceful race of alien space travelers called the Kanamits who come down to Earth eager to help us end war and hunger. Too good to be true, right? Well initially, there are quite a few skeptics (can you blame them?), but once the Kanamits start sharing their advanced technology and even agree to taking a lie detector test, people start falling in line. Only no one knows until it's too late, that the Kanamits manifesto "To Serve Man" isn't a helpful How-to guide on how to make man better, it's a cookbook on how to make'em more tasty.

Anyone have a favorite Twilight Zone episode? Lemme know!
Posted by Heather at 8:27 PM

Email ThisBlogThis!Share to TwitterShare to FacebookShare to Pinterest
Labels: The Twilight Zone, Top 5