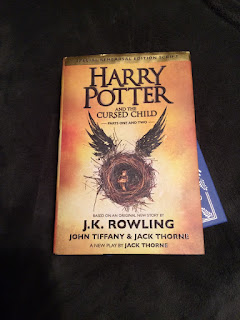 Harry Potter and the Cursed Child - J.K. Rowling, John Tiffany & Jack Thorne: You guys know I love me some Harry Potter, so me picking this up was a given. The story takes place years after the end of the series, and follows Harry's son Albus and his years at Hogwarts and the hardships he faces being the son of The Boy Who Lived. It's written in a screenplay style, so right off the bat it's different from the original series. I actually already read this one, and I have to admit, I liked it but I didn't think it was great. I mean, it was a good story line, but I guess I was just expecting more from it. 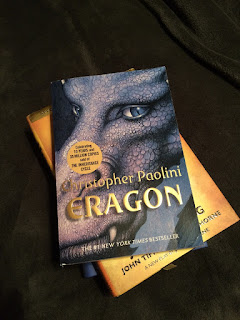 Eragon - Christopher Paolini: I've always heard such good things about this book, but I've never actually read it. The story is about a boy, Eragon, who finds a polished blue stone in the forest and while he thinks it's just a nice treasure he found, a dragon soon hatches from it and his life is thrust into this powerful, magical world. With only the help of an ancient sword and an old storyteller, Eragon must take up the mantle of the legendary Dragon Riders and travel through the dangerous terrain of the Empire, fighting off enemies and an evil king. If that wasn't enough, the whole fate of the Empire may rest in his hands, so you know, no pressure or anything. 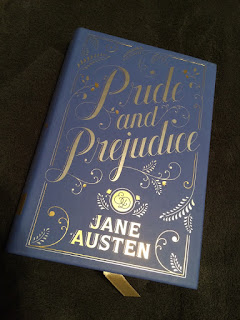 Pride and Prejudice - Jane Austen: I already have this book. In two different copies, actually, but just look at the pretty binding. I really love the look of leather bound books, and I'm such a huge fan of the Barnes & Noble classics line that they brought out which caters to my obsession. I have a few other books from that range, but this one is actually not a hardcover, but it's not exactly a paperback either. It's like a nice in-between and I just love it so much.


Ok, I think that's enough for now. What're you guys reading lately? As always, lemme know if you have any suggestions!
Posted by Heather at 1:48 PM