The Rules of Magic Review

It's no surprise that I love to read. Every year I set a reading goal for myself, and I love to read anything from sci-fi and YA to historical fiction and graphic novels. One that I just recently finished was The Rules of Magic by Alice Hoffman and from the first chapter I was hooked. 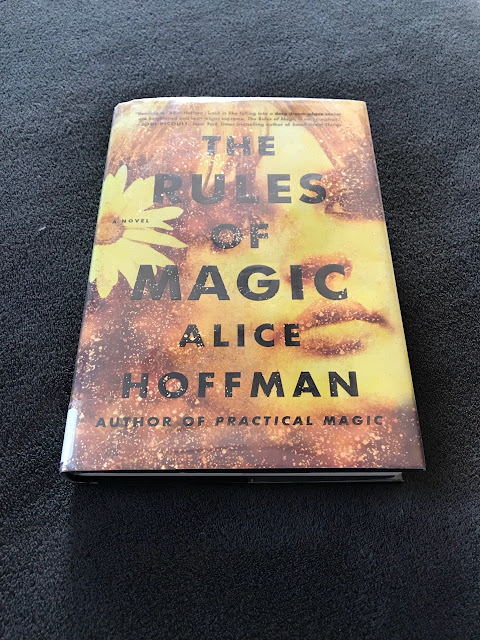 If you're familiar with the 1998 film Practical Magic starring Sandra Bullock and Nicole Kidman, than you already sort of know the characters in this story. Whereas Practical Magic dealt with the lives of Sally and Gillian Owens, The Rules of Magic is all about their aunts, Franny and Jet Owens.

It's New York City in the 1960s, and Francis (Franny), Bridget (Jet) and their younger brother Vincent are no strangers to the fact that they're a bit different from the rest of their peers. Franny with her blood red hair and milky white skin has the ability to call birds to her with just the lift of her hand; Jet, who is as shy and beautiful as they come, can read people's thoughts; and brash Vincent has been using his charm to woo people into things since he was a baby. From the beginning, their mother Susanna has put down some very firm rules: No walking in the moonlight, no red shoes, no wearing black, no crows, no cats, no candles and no books about magic. And the most important rule of them all, never, ever fall in love. All that changes when the three siblings visit their mysterious Aunt Isabelle who lives in a small Massachusetts town where the Owens family has been blamed for every misfortune and they begin to discover who they really are.

During their time with their aunt, they learn all about themselves and the powers they possess, but they also discover the curse that's been on their family for generations. Their ancestor, Maria Owens, was charged with witchcraft for loving the wrong man, and ever since disaster has befallen any man who dares fall in love with an Owens.

The Owens siblings cannot escape from love no matter how hard they may try, and each try to side step the curse for as long as they can, but it all catches up to them eventually. Along with magical elements, Hoffman ties in real world elements such as the Vietnam War, the Stonewall riots and San Francisco's Summer of Love to make a lovely mix of fairy tale and real life. The Owens's can't change who they are, they can't escape the pains of love and affairs of the heart, but they can figure out how to use their powers for good and how to make the best out of it.

I loved the movie Practical Magic and now knowing the whole backstory of the Aunts (and how they had a brother!) and how they came to be, and the things that they had to go through just makes me love it even more. The Rules of Magic is delightful and dreamy and a must read even if you aren't a fan of its predecessor.

Has anyone read anything good lately? Lemme know!
Posted by Heather at 4:30 PM