If you're a fan of stories about stories, or stories about family dynamics, look no further than The Book of Hidden Wonders by Polly Crosby.

Romilly Kemp is a bit of an outcast in her quaint English village and doesn't have too many friends besides her eccentric father and her cat, Monty. When her father falls on hard times, he decides to write a children's book based off the adventures of Romilly and Monty. Soon, the small family is thrust into the spotlight and eventually the father and daughter grow apart. As Romilly gets older, she searches her father's stories for the connection that they lost, and is surprised to find clues hidden within that lead Romilly on an unforgettable journey that will uncover a precious family secret. Big thanks to Park Row Books for having me on this blog tour, and for my part, I'll be sharing an excerpt of this charming story. Enjoy! 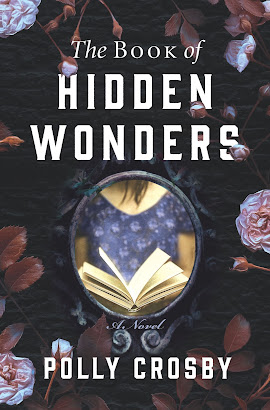 You probably know me as the Kemp Treasure Girl. Maybe you had the books as a child. Perhaps your dad read them to you in those wilting hours of sleep where books become dreams and dreams become books. Did you look for the treasure, digging in your garden, unsure of what you were searching for?

Mine was an unusual infamy for one so young. Not an all-encompassing, celebrity fame, but one that flattened me into two dimensions and picked out the colour of my eyes and my dress. One that stopped people in the street and made their necks crane back round to gaze at me.

The version of me in the books was my friend. She was always there for me, sharing in my adventures, appearing at the lifting of a page. But children grow up, and as I grew taller and wiser, Romilly Kemp in the book stayed young and innocent, a sickly-sweet imposter who wore my dress and suckled at my father’s love, leeching it away until there was barely any left for me at all.

But then I made a real friend. Someone I could trust: someone who knew intimately my deepest, darkest thoughts even if I dare not acknowledge them myself.

But the beginnings of a friendship are like the beginning of a book: you never know how they will turn out until the very end.

Braër was an ancient farmhouse. A month of living there had still not unearthed a fraction of its secrets.

As I ran from the house, tugging on unfamiliar wellies, I stared up at Braër’s mossy roof and dirty walls. Dad told me that it had probably once been called Brother Farm, but time and the soft Suffolk accent had changed it.

The house itself was long and low and surrounded on three sides by a moat clogged with cowpats and slime. Perched in the water at one end was a gargoyle, with a sinister, winking face. It ogled me as I ran past, its eyes bulbous and staring.

On the south side of the house, down an overgrown path stretched a bumpy meadow filled with sagging grass. It was the perfect camp for my newly invented invisible army, and the edge of my territory. I could go there on my own, making pretend campfires and having sword fights with prickly bushes, knowing that I was safe. I could barely see the house above the long, scratchy grass.

As I set off down the path, a sharp whistle brought me back. Dad was stooped in the back door, his huge shoulders nearly touching the frame on either side. Something small and snow-like was curled up in his open palm.

‘I wanted to draw one, so, why not?’ he said, planting the tiny kitten into my eager arms, and suddenly it was mine. ‘It’s a Siamese,’ he said, wiping his hands on his trousers, leaving a snail’s trail of white fur on the corduroy.

‘Is it a girl or boy?’ I asked, trying to look through the fur at the correct place.

‘A boy.’ Dad crouched down, looking at me as I hugged the kitten. Briefly he reached forward and touched my cheek, and I leant into the roughness of his hand. ‘Yes,’ he said to himself, his voice a growl of love, ‘it’s that look in your eyes, right there that I want to capture.’ He straightened up, his knees creaking. ‘I’m going to need to paint him. And you, of course. I have an idea...’ he trailed off. Frowning at me, he turned on his heel and entered the house, leaving the kitten and I alone.

I examined his bony body. He was small and soft, and smelt of wee and sawdust.  He had pale creamy fur tinged with chocolate brown at each edge. As I was studying him, he uncurled himself, tipping off my arms and towards the moat below us. I caught him by the tail just in time, tucking him back safely into the crook of my arm. He opened his eyes for the first time and stared at me with big, red-blue irises. He was hot and slightly sticky-damp in my hands, and I loved him immediately.

I balanced him on my shoulder and made my way up the two flights of stairs to my bedroom, filling the kitten in on the minutiae of our lives.

‘Dad lost his university job ages ago, and he’s been trying to work out what to do with himself ever since,’ I said, tickling him under his chin as I ran up the second staircase; the tiny windy one that Dad was forever tripping up on. ‘He says we’ve moved here so he can paint instead of teach art. It’s the summer holidays, and I’m going to be nine soon, and Dad says he might have to give me a painting instead of a real present for my birthday, but that’s okby me because his paintings are like stories made real. He says someone has to make money, or we’ll be living on bread crusts and moat water. Here, this is us.’

I pushed open the three-foot-high door that marked the entrance to my vast bedroom.

The kitten perked up as we climbed through into the huge, bright space. It was the shape of a tent, one of those old-fashioned tents – a huge triangle. And it felt like a tent too: when it was windy outside, the air caught beneath all the beams and vibrated until you felt like there was nothing but thin canvas between you and the sky.

When Dad had first shown me my room, I spent the entire day in there, not daring to believe all this space belonged to me. There were dustsheets over the furniture, and in the corner, a pretty parasol leant against the wall as if the young lady it had belonged to had left it there only moments before. I liked to open it up and walk the length of the room in a sedate manner, pretending I was as posh as the young lady who had owned it last.

I tipped the kitten onto the bed, and studied him. ‘You look like someone important,’ I said, ‘and important people have long names. How about Captain Montgomery of the Second Regiment?’ Montgomery seemed satisfied with his name, and curled up happily on the quilt.

More info about the book can be found here!