Today is my 30th birthday, so I thought it might be fun to do something a little different. I decided to do a little get to know me-introductory-facts about me thing. So here we go! 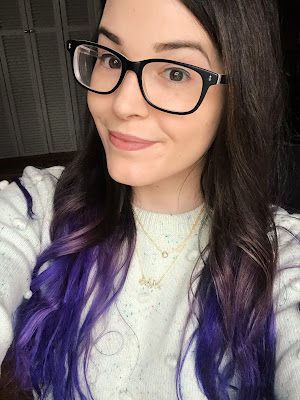 1. My name is Heather and I was born and raised on Long Island.

2. I have an older brother, which led me to grow up on horror movies, video games and WWF wrestling moves. Seriously, I can't even count the amount of times I heard, "Hey, lemme just try this real quick, I won't do it for real" before getting power bombed into beds, couches, anything really.

3. My favorite food is French fries.

4. My favorite tv show is Seinfeld.

5. My favorite video game is either Zombies Ate My Neighbors or Mortal Kombat. And my go to fighter for MK is Kitana. I'm a big fan of hers....get it? I'll be here all week.

6. One of my favorite things to do is watch really terrible B-movies. Me and a group of friends used to do a weekly movie night where we'd watch B-horror movies and just make fun of them the entire time, a la Mystery Science Theater 3000. We called ourselves the B-Movie Crew, and we even had patches and hats made, so you knew we were super legit.

7. On that note, my favorite B-movie is Killer Klowns from Outer Space.

8. I'm a massive Star Wars fan. Growing up and all throughout school, I've been known as "the Star Wars girl." I used to make a lot of my own clothes in high school and I even made this big Star Wars tote out of old boys bed sheets. And once my friend texted me in the middle of a quiz because the extra credit question was Star Wars related.

9. Despite loving Star Wars so much, and that being so much of what others know me for, my favorite movie is actually Clue.

10. I was obsessed with the movie Jaws when I was younger, and wanted to become a marine biologist and specialize in shark research. Then I got to high school and realized I was absolute crap in science, and I'm asthmatic so I can't really scuba dive.

11. What I actually went to school for was journalism. My claim to fame is that in my senior year of high school, I was the Entertainment Editor of our paper and was sent a press kit by an up and coming band who wanted me to interview them and review their show. I went, interviewed them, watched their show and then utterly destroyed them in my review cause they were terrible. That band you ask? The Jonas Brothers. It seems they did pretty well for themselves, so looks like my review didn't hurt them too much.

12. My favorite hobby is baking.

13. I have about 30 tattoos. My goal is to cover myself with lots of nerdy/pop culture related tattoos. So far I have: multiple Star Wars ones, Harry Potter, Buffy the Vampire Slayer, Spice Girls, to name a few.

14. My favorite season is the fall, and my least favorite is summer. I'm too Irish for direct sunlight, my skin only has 2 colors: corpse and lobster, there is no in-between.

16. Keeping with reading, my favorite series is Harry Potter, and I'm a Hufflepuff.

17. I'm allergic to pretty much everything.

18. I hate uncovered windows. Like, when people don't have any blinds/curtains and you can see directly into their house. Makes me cringe.

19. I was attacked by a cat when I was little and received multiple scars, one being on my forehead and I call it my Harry Potter scar.

20. If I had to describe myself as one character, I'd pick Daria.

21. I'm always confused for being at least 5-10 years younger than I actually am.

23. I have really bad anxiety and have had it since I was young. I have good days and bad days, but it's something I try to not let define me, it's only a little part of who I am.

25. I'm the worst sleeper. Ever since I was young, I just could never sleep. I usually only get around 4-5 hours of sleep a night.

27. I love being at home. Seriously, give me a blanket, pajamas, and my couch and I'm the happiest gal.

29. I judge people based off who their favorite Batman is. (It's Michael Keaton. Or Kevin Conroy.)

30. I'm super tiny and even have to sit on a pillow while driving.

There you go! Hope you learned something fun about me, lemme know something about you!