I recommend a lot of books to people. In fact, I keep a running list of books in my Notes app to send to my friends. Here are just a few that I've recently been hyping up. 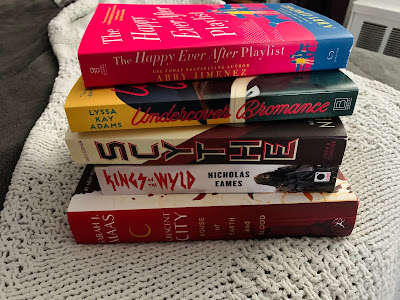 1. The Happy Ever After Playlist- Abby Jimenez: This is a super cute rom-com about two people coming together over a lost dog. It's so quick witted and adorably charming. Plus, Jason is so swoon worthy.

2. Crescent City: House of Earth and Blood- Sarah J. Maas: I will read anything SJM writes and shout it from the rooftops for everyone else to do the same. This is the first book in a new adult fantasy series, and you can read my full review of it here.

3. Scythe- Neal Shusterman: I just recently read this and became obsessed. It's such an interesting concept: basically, humanity has overcome death and there's a group of people called Scythes who are the ones who have to determine who dies in order to keep the balance. It was super engaging and the characters were fun. I can't wait to finish off the series.

4. Kings of the Wyld- Nicholas Eames: I harassed so many people to read this after I finished it. It's an epic fantasy about a group of middle aged men who were famous warriors in their heyday, but who are now all overweight and drunk, who have to set out on one last quest to save one of the group's daughter. Obviously, hilarity ensues.

5. Undercover Bromance- Lyssa Kay Adams: I just love a rom-com! This is the companion novel to The Bromance Book Club and follows the romantic escapades of one of the characters we met in the first book. I enjoyed this one slightly more than TBBC, but they're both really great. Also, Netflix just picked up the rights to the first book, so hopefully we'll eventually get a movie for this one as well.

Lemme know if you have any recommendations!
Posted by Heather at 9:00 AM