Series I Want to ReRead/Continue

I have this bad habit of starting a book series and then never finishing it. I also have a habit of forgoing all other books on my TBR in order to reread a comfort series, especially if I’m feeling stressed or slumpy. Here is a list of series I either want to reread or continue in the new year. 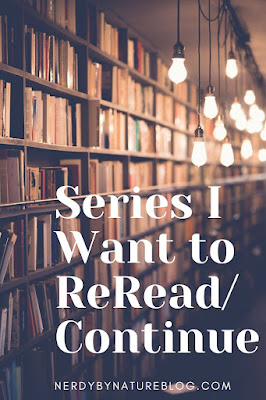 Throne of Glass- Sarah J. Maas: Now, I’ve re-read ACOTAR a ridiculous amount of times, so it’s only fair I show some love to Maas’ other series. I’ve only read these books once, and there are things that I’ve forgotten since I’m not as familiar with it. I recently picked up The Assassin’s Blade which is a collection of all the novellas that I believe follow Celaena before the events of the series, so it’s even more reason for me to dive back into this world.

Percy Jackson and The Olympians- Rick Riordan: This is probably my favorite middle-grade series, I just find it so fun. I already know next year is going to be very stressful, especially in the beginning half, so I thought these would be perfect to pick up when I need a distraction.

The Heroes of Olympus- Rick Riordan: To piggyback off the above, I also want to reread this spin-off series as well. I was only going to add Percy Jackson to this list, but then I watched Joel from Fictional Fates video where he read this series for the first time, and just seeing his joy reignited my love for the whole Riordan-verse, so I had to include it.

Shades of Magic- VE Schwab: I read A Darker Shade of Magic in 2019 and absolutely loved it, so I have no answer as to why I never read the other two books. I’ll most likely reread the first book before I dive into the others just so the story is fresh in my head.

The Wheel of Time- Robert Jordan: I’d put off this series for ages because I was so intimidated by it, but I finally read the first book a few months ago and really enjoyed it, and I'm in the middle of the second now. For these, I think I’m going to listen to the audiobooks as I read physically because I find with a lot of dense, high fantasy books that helps me fully grasp what’s going on.

Keeper of the Lost Cities- Shannon Messenger: I read the first book earlier this year and thought it was so whimsical, but again, just never picked up the next book. Since this is another middle-grade, it should be a good option for when I just need something quick that I don’t need to think too hard about.


Is there any series you want to reread or one you need to finish?
Posted by Heather at 8:00 AM

Email ThisBlogThis!Share to TwitterShare to FacebookShare to Pinterest
Labels: books