I love a good cuppa and I think the following characters would make for great tea time shenanigans. 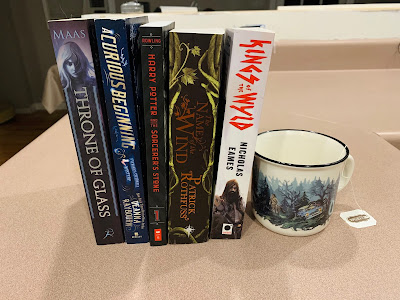 2. Clay Cooper (Kings of the Wyld): Granted, I would probably fill his cup with something a tad stronger than Earl Gray, but I think one of the Kings of the Wyld would be great company. He's fought tons of monsters, trekked through the unforgivable Wyld, and is hilariously real about how he was way too old for half the crap he and his band did.

3. Kvothe (The Kingkiller Chronicle series): The entire time I was reading The Name of the Wind, I was dreaming about sitting in that inn, listening to Kvothe speak about his life. The things that he's done, the stories he could tell, ugh, it'd be amazing to hear.

4. Hermione Granger (Harry Potter series): I mean... who wouldn't want to grill her about life at Hogwarts? Just tell me all about the library and all the delicious food in the Great Hall, I beg you.

5. Aelin Galathynius (Throne of Glass series): Aelin has definitely had an eventful life: from starting out as an assassin named Celaena Sardothien to discovering she's a lost princess to eventually becoming Queen of Terrasen, so you know she's got a lot to talk about. When she's not fighting massive battles to regain her birthright, she likes to read and eat sweets, so I'm pretty sure we'd get along just fine.

Who're some characters you'd invite?
Posted by Heather at 9:00 AM