Man, has my October been jam packed so far! On Tuesday night, I saw Elton John on his farewell tour (which was ah-mazing), then last night I got to do one of my favorite things-- play some trivia! I think if you've read this blog for awhile, you'll know how obsessed I am with Bruce Campbell. What I didn't know was that he just so happens to host a little sci-fi/horror/fantasy trivia show called Last Fan Standing. Luckily, my friend had gotten an email about the show, so me, her and her husband went and it was so much fun. 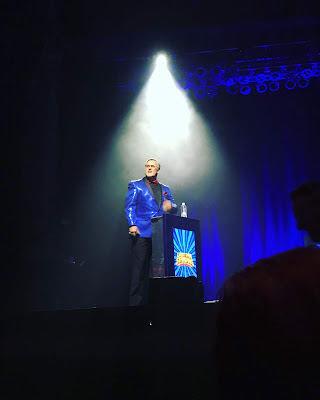 Basically, the premise is to be the last fan standing at the end of the show. I wasn't sure what to expect going in since I had never heard of this event before, but what they did was give everyone in the audience a clicker, then Bruce asked a series of multiple choice questions and at the end the four people who had the highest number of correct answers with the fastest time were called up to play the actual game on stage. Then once you got to the stage, there were more rounds to whittle it down to only one person. Once that was done, they took a little break and started the process all over again with the audience participating to get another 4 people up on stage. Once that person won, they went head to head with the winner of the first round to become the last fan standing.

Turns out, I was really good when it came to answering the questions, but I just wasn't fast enough on the clicker to get up on the stage portion. I'm tellin' ya, me and that clicker just did not click! Although, maybe it was a blessing cause I know I would've been way too nervous if I did get picked and probably would have had the biggest brain fart ever. Which some people did once they got up there and it was hilarious, especially cause Bruce was ragging on people the entire time. There was one guy who went up wearing an Army of Darkness shirt, told Bruce about how much he loved The Evil Dead movies, then proceeded to get an Army of Darkness question wrong. The shame that this man will now have to live with.

I did think it was slightly unfair because the same girl got picked for both rounds, and actually ending up winning, but as Bruce said "it's his show and he'll do as he pleases!" I thought it was also fun that they let the crowd answer the question if no one on the stage got it right, and handed out Bruce Bucks (signed paper money with Bruce's face on it) to whoever got the answer. Bruce also started handing out real dollar bills to people in the audience when they got the answers as well which was such a Bruce Campbell thing to do. I tried raising my hand for a few questions, but never got picked. I think they had something against our row, or maybe I'm just a tad bitter cause I wanted those Bruce Bucks!

The show was so great, and Bruce is just so hilariously charming. Ever the showman, he was telling jokes and stories during the entire thing, and of course, ragging on Long Island as well. I'll have to work on my reflexes so that way if they ever come around again, I'll be ready!

Are you all any good at trivia? Lemme know!