I have to admit, I don't read as much DC Comics as I used to. When I was younger, I was all about Batman and Wonder Woman, but over time I just sort of strayed away from them. I still read things here and there, but I mostly fizzled out. Then a few years back, I noticed that DC started bringing out DC Essentials which were volumes broken down by character that showcased every issue of that character from the very start. I bought as many of these as I could find because they were such a great way to not only brush up on your favorite characters, but also get you started on a character you've always been interested in. I actually have a few Flash ones, but I couldn't pass up the opportunity to pick up The Flash: Starting Line that just came out. Thank you to Netgalley and the publishers for the copy! 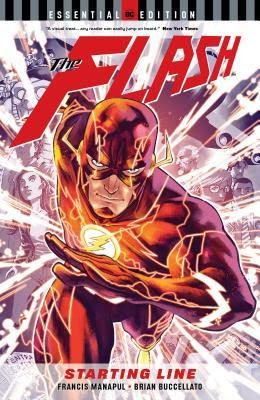 The Flash: Starting Line, part of the DC Essential Edition's, features a collaborative story line from creators Brian Buccellato and Francis Manapul, and includes The Flash #0-12 and The Flash Annual #1. This edition features brand-new cover art (which are beautiful) and is such a great kicking off point to get into this fun character. Not only is it perfect for new fans who want to get into comics but aren't really sure where to start, but it's also a really nice collection for longtime readers as well.

Aside from a great story line, fans can expect to see some of Barry Allen's best foes from the Rogue's Gallery in this. You've got everyone from Captain Cold to Mirror Master to the Trickster who have joined together in their hatred of the Scarlet Speedster and will stop at nothing to bring him down.

I really enjoyed this collection. The artwork was great, especially all the little details like the lightning crackles around Barry as he runs, and it really was a good starting point for fans. However, the only minor issue I had was that some of the panels were a bit crooked and didn't line up that well, so at times it was a little hard to tell which dialogue went where. I'm not sure if maybe this was due to reading a digital version, but I read the majority of my comics digitally and usually never have that problem. Aside from that, I think it's a great release, especially with how popular the CW show is and The Flash recently being introduced in the movie universe (maybe one day we'll get his stand alone move), it gives people even more of a reason to bridge the gap into the comics world. Overall, I'd definitely recommend picking this volume up if you're a fan or looking to start!
Posted by Heather at 12:00 PM