I'm so behind on all my comics, but I recently got a big ol' order from Midtown Comics and these were four I received and immediately loved, so I figured I'd share. 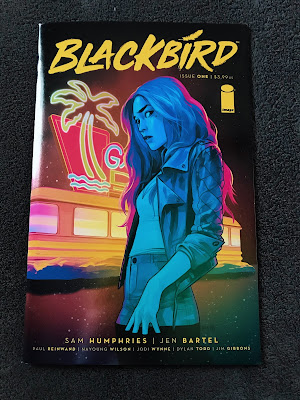 Blackbird #1 (Image Comics): Nina Rodriguez is convinced there's a secret world full of magic hidden beneath Los Angeles, but everyone thinks she's crazy. The crazier part? She might just be right, and she needs to unravel the mystery before the Great Beast catches up with her. I mainly picked this up because Jen Bartel is the artist and I'm obsessed with her artwork, but it turned out to be such an interesting story. It sort of has this noir-Harry Potter vibe and I really dug it. I can't wait for more. I actually picked this one up from Comic Con, so it has an exclusive holographic cover which I'm pretty pumped on as well. 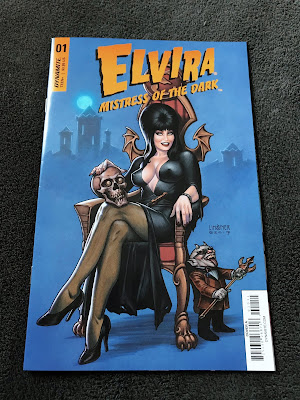 Elvira, Mistress of the Dark #1 (Dynamite Comics): Elvira finds herself thrown back in time to crash Mary Shelley's monster weekend get-away, and thus begins a journey through horror history. All the while, Elvira is being stalked by the most evil nightmare to ever walk the earth *cue Vincent Price laughter*. I love Elvira, she's my campy horror idol queen, so I obviously had to pick this up. It's so funny and has that Elvira wit I love so much, and I love the storyline so far. 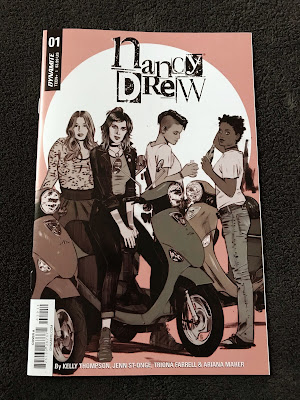 Nancy Drew, #1 (Dynamite Comics): Seventeen year old Nancy Drew is really great at one thing: solving crimes. So when a threatening letter shows up on her doorstep, she has no choice but to return to the hometown she left behind. While there, she'll have to figure out who's friend, who's foe and who's trying to kill her. I grew up reading Nancy Drew, but this ain't my old school Nancy and I really like it. It's refreshing and modern, and I think it has all the makings of being a cool little detective comic. 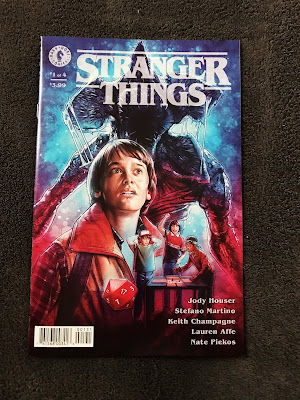 Stranger Things, #1 (Dark Horse Comics): Whereas the smash hit Netflix show follows Will's family and friends trying to solve his disappearance, this comic features Will's time in the Upside Down. You get to follow his journey into all the decay, and see how he used his wit and determination to evade the Demogorgon and escape the Upside Down. I absolutely love Stranger Things so I needed to pick this up. I think it's such a cool concept to follow Will's journey instead of just re-writing the whole first season into comic form. We already know what Joyce and Mike and the gang were doing during this time, but we never got to really see what Will experienced, so I can't wait to see what else this brings to the table.
Posted by Heather at 10:36 AM