My Grams is Cuban, and I grew up listening to all her stories and seeing pictures from her time there, dreaming about one day going myself. My cousin (his Grandma is mine's sister, but we still call each other cousin cause it's easier) and I have always been fascinated by our family history. We're obsessed with all the different ancestry and DNA sites, and delving into our past, so actually seeing Cuba has always been a goal of ours. We recently got to spend a few days there last week and it was so magical.

I'm going to break our trip up into different parts, so check back for more of our adventures!

Day 1: We left NY early Tuesday morning on a flight to Fort Lauderdale. My cousin, Brian, is a flight attendant for JetBlue, so he got us on buddy passes for the way down, and then we had to pay for our flight from Florida to Havana. Once we got to Florida, around 9am-ish, we had to purchase our Cuban tourist visa and check in for the next flight.

There is a lot of confusion surrounding travel to Cuba, whether it's legal or not or what requirements need to be met. All I can say to that is that we had zero issues. When booking our flight, there was a drop down which asked why you were traveling and you just needed to select a reason. There are around 12 or so approved means of travel to Cuba: family visits, government business, journalistic, religious, etc. The one we chose was Support of the Cuban People. Then once you're at the airport, you just need to buy a $50 "tourist card/visa." There were no massive hurdles we had to go through in order to go on the trip, and the actual process of getting in/out of the country was fairly quick and painless. 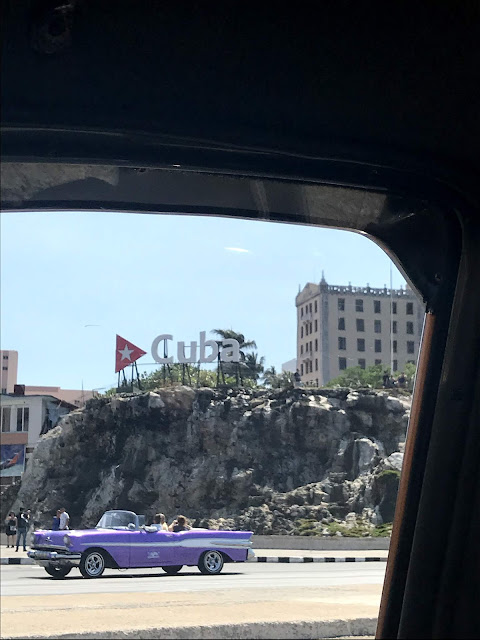 We got to Cuba around 2pm, and then waited on line to exchange our currency. I've actually never been out of the country before, so this was the part that I was most nervous for since it's so unfamiliar. The way that it was set up was like an ATM. You scan your passport, deposit however much you're exchanging and then you receive your CUC (Cuban pesos) minus any exchange fees. The one thing with mine was that the machine didn't give me an option to do this in English, so I really had to dig into my Spanish well in order to do it correctly. Luckily, I had no issues!

After we finished and found our taxi, we were off to our AirBnB. I also have never stayed in an AirBnB before (I really don't take vacation much), but Brian found a beautiful colonial mansion in the heart of Vedado (a neighborhood in Havana). There were two other couples staying as well, but we only saw one briefly the whole time we were there. The house itself was so clean and open, and the owners were so nice. They really made our stay as easy as possible. We didn't have much time to relax once we arrived because we had to meet for our first experience of the trip: an Afro-Cuban cooking class.


Brian had booked us a few cooking classes off AirBnb Experiences, and this first one was so fun. We met at a cafe and our guide then took us to a little country town about 30 minutes or so outside Havana. Once we arrived at the house we'd be cooking at, we got a brief overview of all the different aspects of the Afro-Cuban religion which was really interesting, and then we were given our stations and set to preparing the meal. I was in charge of the garlic, Brian the carrots. It was a bit hard to take pictures while the actual prep/cooking was happening, but I was able to get a few shots of the music and dancing we were treated to while the bulk of the dinner was cooking. 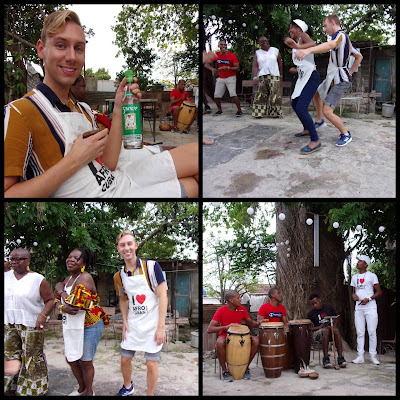 While we were cooking and dancing, we got to know a bit more about the two couples who were with us. They were a group of older people who were on vacation together from Atlanta, and it turns out two of them were originally from Long Island, so we bonded over that for a bit. They were so sweet and even gave us hugs and kisses before we left. We had a massive spread of everything from rice and butter beans to cornmeal, tostones, sweet potato (which isn't like our sweet potato, so I'm not sure what our equivalent would be) and fritters for dinner. We were both so hungry from an almost full day of traveling that we didn't waste a second tucking into everything. Once dinner was finished, we were each given a little Cuban coffee for dessert. I don't like coffee, but I figured I would just taste it, and holy cow is Cuban coffee strong. Then we were back in the cars to go back to Havana.

We got back to our AirBnb around 10pm and were finally able to buy some internet cards (the only way to get WiFi on the island) to ease both our worried Mama's minds, and immediately went to sleep. It was such a nice chilled start to our trip, and really got us both excited for what was to come!
Posted by Heather at 8:59 AM